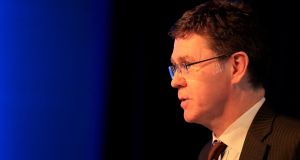 Tom Ryan: has been involved in the business of the association through the GAA’s management committee and another key body, the joint review committee. Photograph: Donall Farmer/Inpho Dublin

Given the scale of change that faces the GAA in the years ahead, starting with a radical experiment to shorten the inter-county season and create additional space for club activities, the association’s new director general Tom Ryan could hardly have chosen a more challenging time to take up the reins in Croke Park.

A friend, quoting a GAA official, said that Ryan’s task looked like someone being shot into space with the reassurance that he’d probably get back safely – and in space no-one can hear you scream.

Viewed less alarmingly, it does give him a breathing space in which to evaluate the benefits of otherwise of the new season in addressing the biggest issue facing the modern GAA, the rebalancing of club and county demands.

Ryan takes over from Páraic Duffy, whose style marked a departure from that of his predecessor, Liam Mulvhill, in that he saw himself as an agent of change as well as its facilitator.

The outgoing DG was fiercely organised and prepared to roll up his sleeves and produce discussion documents to address problems he identified in the organisation. Not all of these succeeded in swaying the association – such as on the issue of payment to team managers – but others, such as the games’ calendar trial of the coming three years were accepted.

Differences of style in the office of the GAA’s top administrator are an inevitable result of evolution. Mulvihill walked into the office within days of his 33rd birthday when that premises was basically a hut with a handful of other employees and on his introduction to the media, detailed his priority as “giving a proper service to the central council and management committee” of the GAA.

He always saw his role as a chief administrator and was amused – and not at all irritated – by the comparison with Sir Humphrey in Yes, Minister. His annual reports were always thought-provoking and frequently influential and he was the main driver of the new Croke Park project but he wouldn’t have advocated change on the floor of congress, like his successor was prepared to do.

Tom Ryan takes over as on one level the least experienced DG, perhaps ever, in that his two predecessors chaired county boards and served on Central Council or led key committees. On another level though, he has been integral to the operation of the GAA during one of the testing periods in its history.

Coming into Croke Park from well-known retailer Brown Thomas, the Carlow chartered accountant quickly found himself in charge of the finances of an organisation, bracing itself like the rest of the country for the most serious economic depression since the 1930s.

He prides himself on the fact that during the consequent financial retrenchment, Croke Park reduced admission prices in order to prioritise attendance – prices effectively haven’t changed in 10 years – and didn’t reduce games development grants nor funding to the counties.

Instead they tried to make up the difference by squeezing on central expenditure and capital projects, which had its own impact, as State funding for those initiatives also dried up to nothing.

Ryan has also been centrally involved in the business of the association through his membership of the GAA’s management committee and another key body, the joint review committee, which oversees the crucial relationship between the GAA and the Gaelic Players Association.

Duffy worked hard to address the issue of the GPA and since the players’ union was incorporated into Croke Park, governance has been tightened to give the two organisations representation on each other’s finance committees.

Despite this there remains disquiet among some GAA members about the role of the GPA and the funding it gets annually (€2,500,000) from Croke Park. Ryan’s experience of dealing with the players will be important in maintaining relations but he will also have to reassure the membership.

The expansion of the new DG’s responsibilities will be dramatic for someone accustomed to a specific area of expertise. Ryan has always been open with the media and his annual financial reports are a model of lucidity – for an audience of non-expert reporters who wouldn’t know a balance sheet if it was hanging on a line in their garden – but that engagement with reporters has been limited to an annual event.

From April he will have to interact on a frequent basis on a range of topics and also develop a thick skin, as with the advent of social media and ubiquitous punditry, criticisms come thick and fast and frequently the less informed, the more scathing.

This will go hand in hand with the relentlessness of the position. Ryan will have the advantage of living in Dublin, unlike Duffy who was a weekly commuter between the city and Monaghan, but he has a younger family and may have to scale back his club commitments as an officer with Templeogue club, Faughs.

He will have the good wishes of the association in taking on such an onerous task but decisions, controversies and all sorts of challenges will make it at times a very lonely station.