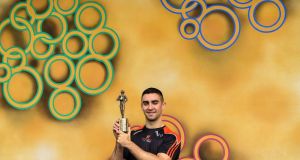 Dublin’s James McCarthy displays his trophy after being named the PwC GAA/GPA players of the month for September. Photograph: Brendan Moran/Sportsfile

The boot is on the other foot in Dublin following the appointment of Pat Gilroy as hurling manager and James McCarthy isn’t so sure he likes it.

For years, the county footballers picked off the very best rising dual stars and convinced them to focus exclusively on the big ball game.

There were some gains on the hurling side, yet even Anthony Daly, with all his charisma, couldn’t convince Ciarán Kilkenny or Cormac Costello, two brilliant young hurlers, to play for him.

Gilroy, within Dublin at least, is even more of an icon than Daly though, and there is speculation he could pull off the greatest coup of them all – by pinching Diarmuid Connolly from the footballers.

The pair are St Vincent’s club colleagues, winning All-Irelands at club and county level together, and Connolly is lighting it up on the club hurling scene at the moment, scoring 0-3 in a recent county quarter-final.

He already has five All-Ireland football medals and, at 30, it’s probably now or never if he’s going to make the big switch to hurling, something that might appeal to him after a hugely frustrating summer dominated by a 12-week suspension.

“I certainly hope not but you never know in life,” shrugged McCarthy, who was yesterday named the PwC GAA/GPA player of the month for September. “He’s obviously playing well for St Vincent’s now as well but I’d be hoping he’d definitely continue with us next year. I suppose you don’t really know.

“I’ve seen clips of him hurling like everyone else. He seems to be well able for it as well. At the same time, you can imagine that the jump from club hurling to county is a massive leap. We’ll see.”

McCarthy acknowledged that it was a long, tough summer for Connolly whose tangle with a match official in their Leinster championship win over Carlow resulted in him missing a huge chunk of game time.

Still, when it mattered most, in the second half of the All-Ireland final win over Mayo, he had a direct hand in four Dublin points, dovetailing superbly with the similarly inspired McCarthy.

“We don’t want to go back over that and how you get banned for such a long time for such a minor incident,” said McCarthy. “That was frustrating but he steadied the ship for us in the final and had such a big impact. He reminded everyone, in case they forgot, how good a player he is and how important he is for our team. We certainly hope he’ll come back next year.”

Gilroy will try to coax Mark Schutte back into the hurling fold too after joining the footballers earlier this year and making his championship debut.

McCarthy, an All-Ireland winner under Gilroy in 2011, knows his former boss will ultimately leave no stone unturned to be successful.

“If he gets a lot of the guys that are missing, the likes of Danny Sutcliffe and these guys, I think they’ll become very competitive again, very soon,” said McCarthy.

“He gets you wanting to play for him – that’s probably the best compliment I could give,” said the Ballymun Kickhams man. “If you have a manager and you want to play for him, that’s half the battle.”

McCarthy will line out for his club in Saturday evening’s glamour county semi-final clash with Kilmacud Crokes.

Ballymun, with county icons Dean Rock, Philly McMahon and John Small aboard, are already Dublin and Leinster club title favourites, and third favourites for the All-Ireland.

“It’s a bit ridiculous, isn’t it?” smiled McCarthy. “We haven’t won the county title in a few years. But I suppose that’s probably decided because we have a few county players and we’ve a mix of guys who are there or thereabouts with Dublin. But we have to earn the right to be that hotly tipped and we haven’t over the last three or four years.”

McCarthy won’t be available for the International Rules series next month. He was contacted by boss Joe Kernan but said three weeks is simply too much time to take off.

The midfielder ironically admitted that if the series hadn’t been returned to two Tests – apparently to save it from extinction – he might have played.

“I probably would have been in a better position to do it all right,” said the AIB Bank official. “It would probably depend on the club as well but 21 days, it’s a long time to ask your employers to let you off.”