Champions Dublin likely to prove too strong for Derry

Despite absence of U-21 contingent, Jim Gavin has named formidable starting XV for league final 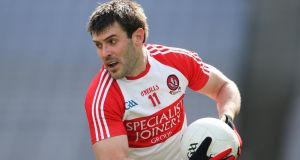 Mark Lynch: will pose a big scoring threat for Derry in the league final at Croke Park. Photo: Cathal Noonan/Inpho

Though the bad old days of serious teams being able to swan through the league with ne’er a care are largely gone, this is the one weekend of the intercounty season when it always feels like we’re forcing it a little. The league matters, we know that. The league final, by and large, does not. Not really.

That’s a generalisation, for sure, and obviously there are exceptions. This very weekend last year, indeed, when Dublin collected their first league title in 20 years. Given the slippage in Dublin’s fortunes since the 2011 All-Ireland, it felt important for them to remind everyone – themselves, most of all – that they were back in the trophy-winning business. Dean Rock’s two thunderous points in the closing minutes to beat Tyrone set a precedent, both for himself and for his side – he and they could be depended upon in a tight spot.

Great vengeance
We know that now. And if the last month has proven anything, it’s that Dublin know it too, as do the teams they come up against. With the exception of Kildare, every team in the league had them where they wanted them at some point in the second half and yet only Cork and Derry managed to put them away.

Cork got the great vengeance and furious anger treatment in the return game a fortnight ago. Few would be surprised if Derry found themselves similarly chastised tomorrow.

Yet before we crown Dublin High Kings Of Everything, it’s worth having a look at why they’ve had to become so adept at making good their escape time after time. For a start, Jim Gavin hasn’t once been able to pick his best team. And still can’t.

Michael Darragh Macauley has had eight different partners in midfield and that’s without Denis Bastick, who will surely come into the reckoning in the summer if back to full fitness. How Dublin will cope if Macauley ever breaks down is not a question Gavin knows the answer to right now and the league hasn’t provided him with much enlightenment.

Of course, when you have Diarmuid Connolly and Paul Flynn sprinting 40 yards crossfield to catch kick-outs above their heads, such concerns possibly don’t weigh as heavily in Dublin minds as they might. Alan Brogan’s resurgence has offset the loss of Ciarán Kilkenny with altogether affluent ease and they’ve been able to name a massively strong 15 for this while leaving Jack McCaffrey, Paul Mannion, Cormac Costello and the rest of the under-21s to one side. So nobody’s going to cry them a river just yet.

Much like Dublin, Derry’s season won’t swing one way or the other on the outcome here.

That they would swap a win tomorrow for one against Donegal in four weeks barely needs saying. If this was championship, Seán Leo McGoldrick would most likely be in boots tomorrow.

But a game’s a game and they have played too hard through the spring to end it with a whimper. When they beat Dublin in Celtic Park six weeks ago, it was victory built on the shoulders of Fergal Doherty and Patsy Bradley in midfield. Doherty’s return after three years away from the game is one of the best yarns of the football year so far, an old soldier standing to attention at the sound of the bugle’s call once more.

Whatever plan Dublin formulate to keep Mark Lynch under wraps, it will be up to the rest of the Derry forwards to weigh in and add up to more than the sum of their parts. If Derry are to win they’ll need improved scoring contributions from Cailean O’Boyle, Emmet McGuckin and Benny Heron.

For all of Dublin’s potential, in only those final 30 minutes against Cork have they really rattled and hummed so far. Derry aren’t the worst 9/2 bet in the world here and they certainly deserve a bit more respect than the five-point spread available.

But Dublin have had any amount of chances so far in the league to throw their hat at it and move on to the summer. Now that they’re here, it’s hard to imagine them not finding a way to see it out.