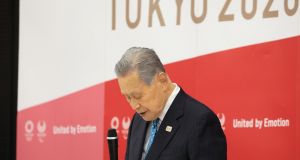 Olympics organising committee president Yoshiro Mori announces his resignation as he takes responsibility for his sexist comments, at a meeting with council and executive board members at the committee headquarters in Tokyo. Photograph: EPA

Every so often Japan reminds the world that it is a crazy, beautiful, lucky-dip of contradictions.

On the face of things, the resignation of an elderly Japanese man from a committee is not an attention-grabber. After all, the world is an addled performer just now. The pandemic rages. The global economy is tanking. You are torn between hoping that Trump finally goes to jail and that Britney is freed. And you are realising that Britney’s most famous line - My loneliness is killing me - stands as the key poetic line of our age, that it belongs with the best of Keats and Yeats.

Meantime, in London, the health secretary has threatened to chuck Britons into prison for 10 years for the crime of going to Magaluf for their usual Easter knees-up. The GameStop rebellion - the revenge of the little guy - has been quashed. More locally, the government and the ASTI are preparing a joint statement declaring that that the Leaving Certificate is officially omni-shambolic.

You may never see the inside of your favourite pub again. You don’t know when you’re going to see your friends again. You may have noticed the photographer Marc Davenant posting a series of beseeching vistas with an explanation of the German word ‘fernweh’- ‘farsickness or a longing to travel to faraway places.’ And you are thinking: dude, if the government promised you even a half day out at the Ballintra Races this year, you’d be on cloud nine.

But Micheál Martin has told you that the only thing to look forward to between now and May is a daily walk. (And you can forget about takeway pints.) So you’ve a lot on your plate. You’ll be forgiven if you don’t care about some cat from Japan right now.

But beneath the resignation of Mr Yoshiro Mori as head of the Tokyo 2020 Olympic Committee is a story of how a two-week, 10 billion dollar sports extravaganza has become a source of enduring misery and sorrow for a brilliant city. Mr Mori stepped down on Friday morning after it became apparent that remarks he made about women hogging speaking times at meetings were embarrassing and just plain old sexist.

“Women have a strong sense of rivalry,” he recently griped. “If one raises her hand to speak, all the others feel the need to speak too. Everyone ends up saying something.”

Fly on the wall

It would have been fun to have been a fly on the wall in the office of the IOC president Thomas Bach whenever this news was broken to him. Picture him staring moodily out of the tinted windows of a palatial office in Lausanne wondering what more could possibly go wrong with these cursed Olympics. Already postponed by a full year and staggering towards a late July starting date which the vast majority of Tokyoites, exhausted by the pandemic, no longer want to see.

A knock, then, on the door and a nervous looking IOC bureaucrat, fluent in 85 languages, appears to break the news that there’s more trouble in Tokyo: that Mr Mori has managed to be insulting towards women. Bach can’t believe this: Mori is 83-years-old and an accomplished statesman . . . a former Japanese prime minister, for God’s sake. Towards which women has he been insulting?

All women, the bureaucrat explains.

Right there and then, Mr Bach would have experienced a keen sense of fernwah.

Anyone in Tokyo during the Rugby World Cup - the last major sporting jamboree before the pandemic - could see that the city was clearly ‘up’ for the Olympics. To the vast majority of Tokyoites, the invasion of pale burly rugby types from around the world was a fascinating diversion, like having an exotic autumn circus coming to town. Most locals didn’t follow rugby or fully understand it but if the mystifying sight of grown men sticking their heads between one another’s legs and grappling and grunting at each other for 80 minutes was a world passion, then they were happy to host its big tournament.

But the city was already decorated for the Olympics. The stadium stood shining and waiting. Japan has a rich Olympic tradition. The event promised to be a marvel: an evocative salute to the Tokyo games of 1964 while, simultaneously, a reflection of how far Japan has travelled as a society and an international presence since the harrowing aftermath and reckoning of the Second World War.

If Japan has changed, the advancement of women within its professional and business culture has been painstakingly slow. It’s less than a decade since prime minister Shinzo Abe vowed to create “a country where women can shine.” It was anointed as Japan’s era of ‘womenomics.’ But it’s a dismally slow revolution.

Japan ranks among the lowest countries in female political representation. The male custodians of its business and political spheres are still getting used to the idea that it is possible for a woman to both raise a family and succeed in the boardroom. Yoshiro Mori, born in 1937, belongs to the generation of Japanese men for whom the sight of a woman in the boardroom must have been alien, let alone the indignity of having to listen to them speak.

In a country where women remain conspicuously absent from leadership positions, his remarks provoked a storm of criticism and objection. He resigned with evident remorse, reportedly shedding tears to his colleagues as he did so. He also advised that an 84-year-old male colleague and friend should succeed him.

In the golden age of the Olympics, it was customary for Juan Antonio Samaranch, president of the IOC from 1980 to 2001, to speak at the closing ceremony and declare that the host city had given “the best Games ever.” He was the patriarch of the Olympic family and those words of praise carried much weight. But since the high point of Sydney, people have begun to wonder about the folly and monumental expense of the Olympics, which left Athens and Rio with a crippling economic bill and was used by China as a show of economic prowess.

Right now, the Tokyo games sit at a deeply unpromising crossroads. But the resignation of Mori is a reminder of the grim determination to press ahead. The radical step of appointing a female successor would help enormously in the recovery from this debacle and maybe even renew enthusiasm for the games on the streets of Tokyo. There has to be any number of suitable candidates but will the organising committee have the courage and vision to break with staid patriarchal tradition?

For there is a small chance that by July, the global spectacle of the Olympics in Tokyo, perhaps with limited spectators in that gorgeous stadium, will be welcomed as a symbol of human resilience and joy even as the globe begins to emerge from the shadow of the pandemic. There’s a small chance that Tokyo could yet thrill the world.

And if Tokyo has a female face and voice presiding over the most challenging Olympics yet, she would stand an enduring symbol of a changing Japan.