GAA weekend that was: the truth behind football and hurling 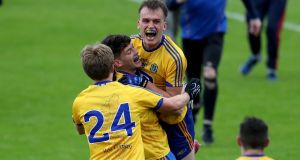 Arthur Schopenhauer always said the truth passes through three stages: firstly, it is ridiculed; secondly, it is violently opposed; thirdly, it is accepted as being self-evident.

And still nothing reveals the truth behind football and hurling better than the championship – particularly after this weekend’s two provincial finals.

Because it is possible that some supporters of Roscommon football – possibly even some of the players too – went through all three stages during the course of Sunday’s Connacht football final win over Galway. What is certain is that once the truth was laid bare it all seemed perfectly self-evident.

This, remember, is the same Roscommon team that was relegated from division one after a demoralising sequence of six successive defeats, including a 21-point hammering from Dublin. The same Roscommon team that was subjected to some repeated inquisition from both within and outside the county ever since the split between then joint managers Kevin McStay and Fergie O’Donnell after last season.

So, when they raced ahead of Galway on Sunday, 1-6 to 0-2, the truth at that stage was possibly ridiculed (that can’t possibly last); then, after they hit seven wides in 22 minutes, and Galway reduced the gap to four, it was possibly violently opposed (no stopping Galway now); only then, when Galway went the rest of the game without a score and Roscommon sailed on home, did it all become self-evident.

Their first Connacht football title in seven years, and according to some of those same Roscommon supporters, their best final performance since the late 1970s, when they won three in succession.

For McStay, therefore, the temptation to point the finger at some of the truths – or indeed untruths – must have been hard to resist. Judge Roscommon on the championship, McStay had repeatedly said over the course of that harrowing league run.

His critics had been many, most vocally former Roscommon goalkeeper and manager Gay Sheerin, who told local radio a few months back that he “didn’t like to see Mayo men on the Roscommon sideline” – a reference to both McStay and his fellow Mayo native and selector Liam McHale.

Instead, in the mad aftermath of Sunday’s win in Salthill, McStay politely declined, simply suggesting that “he didn’t want to go there”. Roscommon hadn’t become a bad football team overnight nor had they just become a great one.

“You lose you are useless, you win you are mighty,” said McStay. “I guess we are somewhere in the middle. I’m really happy, but I’m not going to make more of it than it is.”

Maybe not yet – although Roscommon weren’t the only team to reveal some truths over the weekend, or at least ridicule some of the championship odds which had made Galway clear favourites to win on Sunday.

The achievement of the Cork hurlers in winning the Munster hurling title was perhaps more revealing, coming from a position of being 10/1 back markers for the provincial crown when the championship began just seven short weeks previously.

Still their win over Clare at Semple Stadium on Sunday – politely described as a five-point hammering – has, like McStay’s victory with Roscommon, left Cork manager Kieran Kingston insisting that we shouldn’t make more of it than it is.

“It’s important that we keep this in context,” said Kingston, his team drawing increasing comparisons to Cork’s All-Ireland winning team of 1999, and indeed 1990, both of which featured a similar clutch of youngsters.

“We had a similar reaction in 2014, won a very good Munster championship down in Páirc Uí Chaoimh, but we got a lesson from Tipperary a few weeks later. We have to bear that in mind, as we let the players back to their clubs for the next couple of weeks, and then prepare for a semi-final. That was a very hard learned lesson in 2014.”

And the Clare hurlers, no less than the Galway footballers, haven’t become useless just because they’ve lost: there is a sense Clare got things tactically wrong on Sunday more than anything else, particularly when not contesting the Cork puck-outs, although the truth there should soon be revealed with Tipperary awaiting them on Sunday week.

For now, Roscommon and Cork march on, their championship odds shifting with them. Roscommon’s outright chances for the All-Ireland football title were halved after Sunday, from 66/1 to 33/1, and while their record in Croke Park in recent years has not been good, no team will fancy playing them at the quarter-final stage.

Cork’s All-Ireland hurling title odds have also been shortened to 7/2, from 6/1, and even with Kingston’s justified air of caution, they are a team moving with increasing intent – one of the many footnotes to Sunday’s win being Patrick Horgan eclipsing his legendary fellow Glen Rovers man, Christy Ring, as Cork’s top scorer in championship history.

Galway remain the outright favourites for the hurling title, but if they do happen to face Cork on the first Sunday in September – and that is how they will potentially be paired – then the truth is they’ll find themselves looking to reverse six All-Ireland final defeats to Cork, going back nearly 100 years.

And it’s only at times like that when the truth and the whole truth will become self-evident.