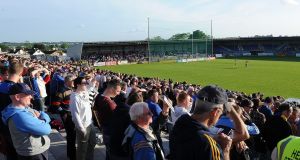 In the world of GAA finances, this is the worst of times. No hyperbole, no poor-mouthing. Every unit of the association from Croke Park down to the smallest club in the tiniest village has had a hole blown in its 2020 balance sheet with no obvious way to fill it out. Right now, more so than the virus itself, this feels like true existential threat to the intercounty season.

It goes like this. When your main revenue stream is based on the simple act of people congregating, you have nowhere to go once that simple act is restricted by law. So when the Government chose not to increase the crowd limits on outdoor gatherings from 200 to 500 on Tuesday, every county’s plans for the months ahead dissolved. An increase to 500 wasn’t going to make anybody rich but it was going to make a genuine difference. Without it, the picture for the next few months looks bleak in the extreme.

“It was bolt from the blue,” says Longford chairman Albert Cooney. “All the indications we got from the GAA, from the media, from the Taoiseach, was that this was being changed to 500 people. We are always on tight budgets anyway but you would have a genuine worry now about how we’re going to keep things going until Christmas.”

There are, yes, bigger problems in the world right now. But putting the situation in perspective doesn’t make it any less real. If you want a crash course on GAA finances, ask a small county how they’re getting through this. No two counties are the same but Longford aren’t a bad model for the coping classes in the association. They have a bit of debt weighing down their saddle but nothing that would be crippling in normal times.

These are not normal times. Year to year, Cooney would expect the gate receipts from the club championship that begins this weekend to come in around €170,000. If the 200-people limit stays in place through to the middle of September, they can basically sell around 100 tickets a game for a tenner apiece. The championship has 30 games so he can only budget for through-the-gate money of €30,000. Had the crowd limit been lifted to 500 per game, that number would have gone up to around the €100,000 mark at worst.

That’s the first problem. The second one is that it costs more now to put on club championship games than it ever has. All games, right down to the junior championship, have to be ticketed, meaning an electronic ticketing system has had to be put in place and paid for. Because of the health risks of stewarding crowds, the usual volunteers have been difficult to get so the county board has had to pay security staff. Every ground has had to be set up with hand sanitising stations. All in all, expenses have almost doubled.

“I would say we will end up making around €12,000 to €15,000 for the whole of the club championship,” Cooney says. “So basically, you’re talking about less than 10 per cent of the revenue you would normally rely on to get you through the year. On top of that, our main fundraiser for the year is our annual race day in Punchestown in April. That had to be cancelled, obviously. It would normally bring in around €200,000.

“So it’s a bad situation, obviously. I’m embarrassed when I talk to the county management because we owe them for some of their expenses from the league already and we don’t have it to give to them. We’ll get it sorted, it will be fine. But it’s a serious problem.”

Longford’s situation is replicated across the country. Club championships are being played every weekend in every county in front of crowds of barely 100. And very soon, the rubber will meet the road. Five weeks from Monday, intercounty squads can start training collectively again, at the usual huge expense.

Let’s say the county hurling and football teams both train for six weeks and both get knocked out of the championship at the earliest opportunity. Even in that minimum scenario, counties are looking at a bill of between €35,000 and €40,000. In a lot of cases, that money just isn’t there.

At the top of the GAA, there’s not an awful lot they can do to help out. They lobbied the Government on crowd sizes all the way up to Tuesday and got nowhere. On the list of priorities, increasing crowds at sports events is understandably well below getting schools open and working out what to do with pubs. The feeling in Croke Park is that it is likely to be mid-September at the earliest before there’s any change.

If it happens at all, that is. The reasons Dr Ronan Glynn gave during the week for restricting crowds at matches had nothing to do with the number of people actually in the ground. The health authorities are more worried about people car-pooling, households mixing before and after, all the usual matchday hubbub that goes along with any sporting event. Those concerns will presumably still apply in October and November when the championship is supposed to be underway.

All of which leads to a huge conundrum for the GAA. If the crowd sizes don’t rise, who will pay for the championship? How much does it have to cost before it becomes a luxury that some counties aren’t willing to bear? There’s grant aid due from the Government, €40 million to be split between the GAA, the FAI and the IRFU – are people going to be okay with that money going to cover the training expenses of intercounty squads?

Taking soundings from across the board this week, it’s clear that most parties – counties and Croke Park alike – feel a responsibility to the GAA public to put on a championship this year. But it would only take a couple of counties to withdraw on the basis that they simply don’t have the price of it and suddenly the whole enterprise would be in doubt.

This is where we are. Where we’ll be in a month is anyone’s guess.

1 What next for green jersey hero Sam Bennett after toughest of Tours?
2 Gerry Thornley: Talk of Anglo-French hegemony is over the top
3 LeBron James has become this generation’s Muhammad Ali
4 Why this weekend’s Champions Cup semi-finals are still worth watching
5 The Offload: Saracens prove Pro14 is not fit for purpose
Real news has value SUBSCRIBE

Why this weekend’s Champions Cup semi-finals are still worth watching 13:32
LeBron James has become this generation’s Muhammad Ali 12:36
Raiders make winning start to life in Las Vegas 11:16
Gareth Bale’s agent says he could stay at Tottenham beyond this season 11:03
Tour de Covid tells us to cheer, clap and don’t ask questions 10:07