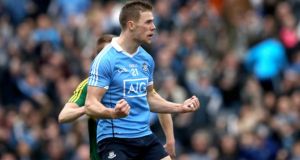 Mismatches are a tough sell and the gap between a handful of counties and the rest is widening to the point of being potentially unbridgeable for more than three quarters of the participants. In the case of most it’s no longer cyclical as it might have been in the past. There will be the odd exception.

Against that backdrop, Paul Mannion’s contribution of eight points from play – he had a 100 per cent success rate from eight shots – will be parsed against the calibre of the opposition on the day and a Dublin tally of 4-29. He was afforded a certain amount of space and created the rest for himself with good footwork and it should be acknowledged superb ball-striking off either foot.

The 24-year-old, who spent the 2014-15 academic year in Beijing and Wuhan as part of his UCD degree in Chinese and International Commerce, has enjoyed impressive contributions to Dublin’s cause in the past, notably his 1-1, in last year’s All Ireland quarter-final win over Donegal.

He came on as a substitute after 56 minutes, when Dublin were a man down – Diarmuid Connolly had received two yellow cards and the team would be further reduced when Eoghan O’Gara was sent off in stoppage time – and proceeded to score a brilliant individual goal that effectively ensured the Dubs’ success.

There was no such pressure on Sunday but his eight points is the largest contribution from play by any individual in this season’s All Ireland senior football championship to date. Mannion’s tally of eight is one clear of four other players who have scored seven points or the equivalent thereof in cumulative terms in the 2017 championship. 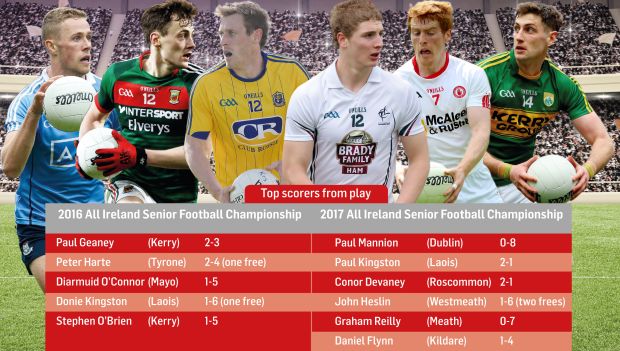 It’s interesting that three of the four players that amassed seven points all did so in the Leinster Championship. The exception was Roscommon wing back Conor Devaney who scored 2-1 in his team’s Connacht SFC win over Leitrim.

What’s common to all six players in the graphic below that represents the 2017 championship is that they were involved in matches in which winners won convincingly.

So when was the last player to eclipse Mannion’s eight-point total from play in a championship match?

Well the answer as the graphic above reveals is last season’s championship. Tyrone’s Peter Harte scored 2-4 (one free) in a remarkable Ulster SFC semi-final replay against Cavan, a match that Mickey Harte’s side won by 5-18 to 2-17.

The game represented the highest ever cumulative total in an Ulster championship match and the most number of points scored by the losing side under the same parameter.

Kerry’s Paul Geaney matched Peter Harte’s total, helping himself to 2-3 during his the Kingdom’s Munster final win over Tipperary. His team-mate Stephen O’Brien chipped in with 1-5 from play against Clare, while Laois’ Donie Kingston scored 1-6 (one free) in a Leinster championship match against Wicklow.

Mayo’s Diarmuid O’Connor posted 1-5 in a Round Three qualifier against Kildare to join the group who managed eight points from play in the 2016 championship.

For this season so far Mannion’s eight points is the gold standard.