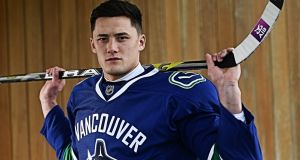 Wexford hurler Lee Chin: “I’m not worrying about injury. Obviously I just hope I come back in one piece.” Photograph: Ramsey Cardy/Sportsfile

The whole purpose of the AIB Toughest Trade series is to see how amateur GAA players cope with a professional sport in which they have no previous experience, although in the case of Lee Chin that simply isn’t true.

Last Christmas, when the Winter Wonderland On Ice set up in Wexford, Lee borrowed a pair of ice skates and spent a few mornings slipping and sliding around, mostly on his back side. He also got a loan of a hockey stick and puck one day and hit a few shots against the wall of the ice rink.

Chin also admits he went ice skating once or twice as a teenager.

So, when Chin heads to Canada next Tuesday to spend one week training with the Vancouver Canucks, one of the top teams in the professional NHL, he won’t actually be starting from scratch. Although in fairness he’s never actually dressed up in all the ice hockey gear.

“Well no, I’ve never actually played a game of ice hockey either,” says Chin. “Luckily the guy who was running the Winter Wonderland over Christmas gave me the run of the place for the morning, when I wanted it. So I’ve got a little better on the ice alright.

“When AIB first asked me to come on board, in December, I was looking to give myself some background, get a bit comfortable on the ice before I head out there, so I’ve managed to do that.

“It is probably one of the most difficult sports to take on. That challenge is part of the appeal for me, to see how far I can push myself when I get over there. It’s quite exciting, actually, but I don’t really know what to expect, because there probably aren’t too many similarities with hurling. Obviously it’s a fast game like hurling, and hopefully I can do the GAA proud in competing to a certain level on the rink.”

Chin, probably more than anyone else, may well fall flat on his face – if not his back side again: he’s not without some versatility, however, having played with the Wexford Youths soccer team for a spell last season.

“Alex didn’t give too much away. The one thing he told me was to make sure I keep my head up. There are so many different components to the game. The sticks are a lot longer, all the padding, and obviously you are on ice. It’s not a sport you pick up straightaway, and would normally be a long process. But I’m not thinking or worrying about injury. Obviously I just hope I come back in one piece.”

Exactly what Wexford hurling manager Davy Fitzgerald is hoping, having seen Lee (now operating at full forward) play an important role in Sunday’s win over Limerick in the Allianz Hurling League. Lee, however, won’t miss any games, as he heads on next Tuesday, two days after Wexford play Galway in round two.

“We were back training with Davy Fitz when I was first asked, so I had to throw it by him, but once he knew I wouldn’t actually miss a game with Wexford, and there was no great commitment in training beyond the week in Canada, he was happy enough. Sunday was a great start, in that we hadn’t beaten Limerick in 12 years, so it was nice to get the win, but the one thing we feel as players is that we’re definitely going in the right direction.