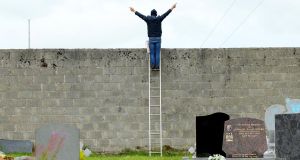 The GAA is not expecting any movement on the lifting of crowd restrictions when the Government plan, Living with Covid-19, is published next week.

Despite speculation that the return of a few hundred spectators might be green-lighted in the coming days, the view in Croke Park is that further discussions will take place before any new measures are announced.

In a statement simultaneously released with the FAI and IRFU, the GAA announced that the three organisations had met on Friday, and would do so again next week with a view to engaging with the Government on the subject of the “safe return of supporters to stadia”.

It is likely, however, that restricted attendances will be permitted for at least some fixtures – depending on the overall public health picture – by the time the season starts on the weekend of October 17th.

Friday was a busy day for national administration with county chairs briefed on the return to play proposals in advance of the remote management committee meeting considering the detailed proposals of the association’s Covid advisory group.

The final say in their acceptance comes on Saturday afternoon with another remote meeting of Central Council to sign off on the plan.

Delegates will also be briefed on financial details, the raising of funds by Croke Park to provide bridging loans to counties in order to cover their teams’ campaigns.

With Government keen to see the intercounty competitions go ahead, the GAA has been applying for funding for the counties, which has been widely reported to total €19.5 million – an amount additional to the €40 million emergency funding for Gaelic games, rugby and soccer which is currently being allocated – although the final grant may fall slightly short of that.

Whereas there has been no finalising of the figures or even official confirmation, Croke Park officials are sufficiently confident to proceed with the start of the intercounty season on Monday when teams return to training.

Financial measures will include central reimbursement of expenses, which as well as being quicker will also facilitate greater control from Croke Park.

Among the protocols advanced by the advisory group were the reopening of GAA facilities such as dressing-rooms and gymnasia. Showers will also be permitted subject to rotas intended to reduce the numbers in the shower areas.

It is also anticipated that commercial testing will be required to deal with any suspected cases in teams.

“We’re conscious that we can’t present ourselves as a special case if players need testing,” according to one source, “and to guarantee quick testing and results we will need to avail of private facilities – subject to strict validation.”

The GAA cannot, however, follow the precedent of rugby, soccer and professional sports in maintaining a bubble for players, who will continue to live and work in the community.

There will not, for instance, be weekly mandatory tests of every player like in rugby, a regime which has been calculated as likely to cost the association up to €500,000.

Other measures will see match-day entourages reduced to 40 per team – 26 players, 12 backroom personnel and the county chair and secretary.