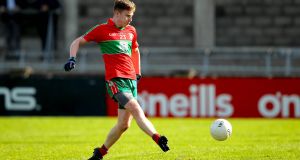 Kerry SFC semi-final: Dr Crokes v Mid Kerry, Austin Stack Park, 7.0 - Crokes have kept going as contenders despite transition although they have lost one of the young guns Tony Brosnan who sustained a punctured lung. Tight call but Croke’s will find a way.

Clare SHC semi-final: Éire Óg v Sixmilebridge, Cusack Park, 5.0 - Not much between the teams and if it ends up in toe-to-toe combat, the Bridge will be slightly favoured even if the town side have the x factor of Shane O’Donnell.

Kilkenny SHC semi-finals at UPMC Nowlan Park: Dicksboro v O’Loughlin Gaels, 3.0; Ballyhale Shamrocks v James Stephens, 5.0 - All-Ireland champions Ballyhale have revived as the championship progressed and will have too much firepower for the Village. The all-city first semi-final will be closer with perhaps Dicksboro shading it.

Armagh SFC final: Crossmaglen Rangers v Maghery, Athletic Grounds, 4.0 - Cross are in a rebuilding phase, with an ominously gifted minor team on the way, and even though they may be vulnerable at the back against a Maghery team that has beaten them this season and four years ago were only the second club in 21 seasons to interrupt Crossmaglen’s run of titles, the champions have the forwards to take three-in-a-row.

Warrenpoint v Kilcoo, 7.0 - Carryduff’s promising young outfit may take a little while longer to arrive, so Ballyholland get the nod whereas in the second fixture, All-Ireland finalists Kilcoo have a score to settle with a Warrenpoint team that defeated them earlier in the season.

Dublin SFC semi-final: Ballymun Kickhams v Kilmacud Crokes, Parnell Park, 4.30 - A serious confrontation between two galactico outfits with a clutch of starting All-Ireland winners. Ballymun have underachieved with just one Dublin title and a close shave with an All-Ireland club to show for a decade at the top but manager Brendan Hackett has had untrammelled access to the county players this year and their form has at times been hugely impressive, their balanced side - Philly McMahon, John Small, James McCarthy and Dean Rock spread throughout - may have a slightly longer tail, than Kilmacud but the championship has had their exclusive focus this year. The opposition won the title two years ago and overcame a slow start to stiff Vincent’s in the quarter-final. Paul Mannion and Cian O’Sullivan are highest profile but Rory O’Carroll is still around plus a host of Dublin panellists. Could be Ballymun’s year, though.

St Loman’s v The Downs, 5.30 - Strong Mayo influence in these semi-finals with John O’Mahony in charge of The Downs, as they take on former champions Loman’s, going for a sixth successive final - which they should make. O’Mahony’s former charge Liam McHale has helped to revive Athlone, who haven’t reached a final for 17 years, but who will pose an emerging threat to an older Tyrrellspass team, who may hold off the youthful rebellion - for the moment anyway.

Derry SHC final: Slaughtneil v Kevin Lynch’s, Celtic Park, 2.0 - They won’t have the chance to add to their three Ulster titles in four years but the renowned duallists from Slaughtneil can make it eight titles on the bounce.