Organisation argue their ‘key management personnel’ are a body of volunteers 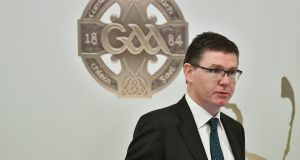 The GAA has defended the policy in relation to the inclusion of top salaries in its annual accounts. Under FRS (Financial Reporting Standard) 102, accounts are meant to include the aggregate payments to key management personnel.

For the purposes of this provision the GAA argue that its relevant personnel is the association’s Management Committee, which is a body of volunteers and as such receives no remuneration.

‘Key management personnel’ is defined as: “Those persons having authority and responsibility for planning, directing and controlling the activities of the entity, directly or indirectly, including any director (whether executive or otherwise) of that entity.”

Arguing that Management is the body entrusted with the above functions means that the remuneration of full-time staff in Croke Park does not get listed.

Tom Ryan is the GAA’s Director of Finance. Asked was the focus of the accounting standard not the full-time staff rather than the voluntary committee, he accepted that there was a case for that but given the definition of key management personnel, that the latter was a more appropriate route to take.

“You could argue that and we did toss that around with the auditors (Mazars) but what we have in it, the auditors are happy complies with the requirements. We did give it a bit of deliberation but I believe that we meet the required standards. In an organisation like ours, which is volunteer led, you’d be slow to say that the leadership is actually the full-time staff. That would be a little bit anathema.”

The distinction in the past between full-time administrators and elected officials was a cause of friction with political power more often residing in the network of voluntary committees, appointed by the president that run the organisation’s activities.

“I think we’ve gone beyond that,” said Ryan, “but politically I don’t know would it be said that the Croke Park staff have that role.

“To be fair to Páraic (Duffy) and the office of Director General, the formulation of policy isn’t strictly within the remit. I accept that that’s despite what happens and what might emerge because it is a collegiate process but direction and strategy emanates from Congress, Central Council and Management.

“There is no paid voice on any of those bodies, no vote and that’s the thinking behind it. I think there are parallels in other organisations and as I said, the auditors were happy with this approach.”

There may be further disclosure however in other areas in the future, as Ryan said at last week’s launch of this year’s financial report that there is an appetite to consolidate the accounts of other GAA units into the overall report.

“What you are looking at there is all of the entities that are directly controlled and owned by this building (Croke Park). The next stage in terms of consolidating accounts, and where we would like to get to and where we will over the course of the next few years is that we would consolidate in provincial results and county results to build a better overall picture of the finances of the association nationally.

“We will struggle to get to clubs, simply because of the breadth and reach require. Technically speaking, the GPA is not under our auspices in terms of ownership and control. We are a funder of it, we are the most significant funder of it but it wouldn’t be proper to consolidate it or report it in our accounts.”