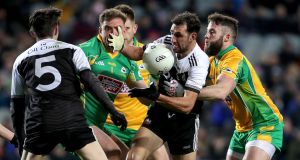 Towards the end of the first week of the Government’s Phase 1 in the exit from coronavirus restrictions, the GAA is considering its next move. This weekend marks a fortnight since the interview with president John Horan was broadcast on The Sunday Game and although the overall situation has moved on, there has been no update from Croke Park.

In his interview, Horan said that the supervised opening of walkways around clubs was under consideration and although progress has been made it is not believed that any announcement on this is imminent.

Privately, the view is that whereas no major departure is likely to be announced in the coming days – an announcement is expected by early next week – the GAA will be keeping a close eye on how the Government phases progress.

Despite a view among many that the roadmap is a series of milestones to be passed, it will all depend on how the pandemic reacts to the easing of restrictions and if there is a resurgence in infection rates, these milestones will not be reached.

If however, according to one source, the vital statistics remain low and the targets are met, the effect will be to quicken the association’s return to some activity, which isn’t scheduled until Phase 4 on July 20th.

“If the Government are satisfied to make the next two dates, 8th June and 29th June,” according to one source, “then all bets are off and we are really up and running. That’s a big ‘if’ though and people are underestimating just how big.

“Where we’re at really is that the GAA has said, it’s 20th July possibly as a return to training and October for championship. That’s given us a huge amount of time to read what’s happening ahead of 8th June and 29th June.

“There are other elements to be looked at as well, whether that’s the use of club walkways or facilities for meetings but at the moment and in the absence of more data the GAA is still in lockdown. Just because there’s a greater air of optimism around doesn’t mean ‘let’s have a championship’.”

The GAA will be guided by its Covid-19 advisory group, which was established at the beginning of the month. Although it was initially thought that it would quite quickly produce a set of protocols to govern any return to activity, it is not now expected to release its first report for a while.

To date it has met twice and because of its size (14 members), takes time to set up meetings. It also must sift through mountains of documents. For example among the material currently produced by the GAA are 28 different scenarios governing return to play at the most basic club level.

If there was an undue initial emphasis on social distancing among spectators, the problems on the field have taken over with John Horan stating that the GAA wouldn’t take the risk of infection being transmitted on the field given that the players as amateurs have to re-integrate with their communities afterwards.

One doctor with extensive experience of the GAA spelled out the scale of the problem.

“There are no stats or evidence on what constitutes ‘safe exposure’ at the moment. The key things in field sports – especially in rugby and to a lesser extent Gaelic football because they have far more engagement than in soccer where participants play at more of a distance and knock the ball about – are contact and most importantly, air space.

“Bear in mind, fellas are hyper-ventilating, their respiratory rates and ventilator function at the highest levels of both volume and rate. That’s where dispersal happens and it’s a far bigger concern than contact – the droplets that infect the body and surfaces.

“Space is also much bigger than people realise. It’s two by two, a diameter of four metres – although some of the Europeans are specifying one metre but our distance is two. If you do the sums on that as a circle, it’s 12.6 metres squared and if you do it as a square it’s 16 metres squared, which is a big air space.”

The GAA’s position that as long as social distancing remains a requirement, matches can’t go ahead may well be about to come under pressure for two reasons.

One is that although there is no certainty about how matters will progress the strongest belief is that there will be neither a proven vaccine nor an effective therapy for the conceivable future. In those circumstances, field sports if they are to go ahead will entail a level of risk, however closely controlled.

Should other sports go ahead, can the GAA hold back indefinitely on the re-introduction of Gaelic games?

Secondly there is increasing focus on the view that intercounty activity, which involves smaller numbers than club level, which has to date been the GAA’s stated priority, and is more easily monitored. It is believed that the advisory group has considered this without taking a position on it so far.

Politically the GAA might not want to cross that threshold but it may end up on the agenda.