Of the 3,008 players who responded to last week's survey, 22 per cent are opposed to returning 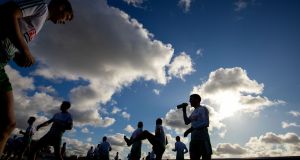 Over 40 per cent of those surveyed were either uncertain about (21pc) or opposed to (22pc) a return to club training and matches before a vaccine for coronavirus is discovered. Photograph: Tom O’Hanlon/Inpho

A survey by the Club Players Association has cast further doubt on the prospects of GAA matches taking place this year. This follows GAA president John Horan’s ruling out on Sunday of a return to play while social distancing remains in force.

More than 40 per cent of those surveyed were either uncertain about (21pc) or opposed to (22pc) a return to club training and matches before a vaccine makes the activities safe. The survey has been submitted to Croke Park.

CPA chair Micheál Briody said that the next month and a half will be critical in deciding whether any matches are played in 2020. He also said that the club organisation would make their data available to the GAA’s Covid Advisory Group.

“In the next four to six weeks,” he said, “the group established by the GAA really just needs to assess with the HSE and NPHET (National Public Health Emergency Team) what Gaelic games will look like and what is and isn’t acceptable.

“If it [a return to activity] isn’t acceptable within any sort of foreseeable time frame, well then I know we’re always talking about ‘certainty of fixtures’ but it might be best to give ‘certainty of no fixtures’ and focus on 2021.

“I sent the findings on to Tom Ryan [GAA director general] and asked that he forward them to the Covid advisory committee. That’s as much as we can do with the information.”

He added that the CPA hadn’t been trying to establish a decision by head count and was happy for the GAA’s specialist advisers to draw any conclusions from the data.

“I’m not qualified to recommend anything on foot of those statistics or even say when we get to 80 per cent it’s fine because, in some clubs, if they got 90 per cent of players back they wouldn’t be able to field.

“If you want to use our database for other surveys, more scientifically-based, that the medics on the committee want to conduct, we’ll happily accommodate that.”

Among the other findings of the nine-question survey, similar numbers (39 per cent – 13 undecided and 26 opposed) would not be happy to attend a club match this year whereas that rises to two-thirds (66 per cent – 16 and 50) in respect of inter-county fixtures.

“Another key piece of data is that over a quarter of respondents (27 per cent) live with a vulnerable person. That was higher than we would have thought and tells you the risk.”

Another finding was that 47 per cent of respondents answered what they missed most about the absence of games as “the craic with team-mates”.

In its response last week to the Government roll-back of Covid-19 restrictions, the GAA envisages no opening of club facilities or on-field activities until 20th July.

Whereas the association has been making it clear that club activity will take precedence over county whenever a lifting of restrictions takes place, the response to the CPA survey (3,008 of the estimated 25,000 membership) indicates that there are reservations about doing so in the current environment.

“Our questions are far from scientific or absolute because it’s quite a subjective question, ‘if you have a vaccine’. There’s no hope of vaccine being in place this year.

“What we were trying to do was gauge the feeling at club level. Are all the facts known and can we give a definitive yes or no? No – which is why there’s quite a number of ‘don’t knows’ in answer to some of the questions.”

Briody accepted that it would be a good idea in July to open up club facilities for informal exercise. In the long run, he felt there will be hard questions to answer if the GAA moves into 2021 and there is no let-up in social restrictions and no vaccine discovered. At that point it may become a matter of managing risk.

“You could have soccer and rugby back and no Gaelic games, running the risk of losing a generation. Then there’s juvenile. It won’t be me who decides that or John Horan or Leo Varadkar. It will be the parents, who say my Jimmy or my Mary isn’t going back until I see fit.