Dunloy turn the tables on Cushendall 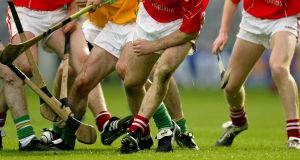 Five unanswered points at the start of the second half paved the way for Dunloy’s 12th Antrim senior hurling championship title against old foes Cushendall. The Cuchulainns put a lacklustre first half behind them to blow away the opposition at Ballycastle on Sunday.

Dunloy trailed by three at the break but came out a different team in the second half to outscore their opponents 2-8 to 0-1 in the third quarter. Goals from Conal Cunning and Nigel Elliott midway through the half sealed the victory, while late goals from Conor Carson and Paddy Burke put a flattering look on the scoreboard for Cushendall.

In a first half that failed to really get going, Dunloy opened a two-point gap after five minutes with a Paul Shiels free and a superb Eoin O’Neill effort from play. Cushendall responded with points from Neil McManus and Paddy McGill to restore parity.

The sides were still tied at 0-3 apiece on 18 minutes but Cushendall landed four of the last five scores of the half to take a 0-7 to 0-4 lead into the half-time break.

Dunloy sprung to life after the restart. Shiels converted a 65 after Cunning’s goal-bound effort was turned round the post. Shiels added two more frees and points from Nigel Elliott and Keelan Molloy had Dunloy 0-10 to 0-9 ahead.

Carson stopped the rot for Cushendall but Molloy, Cunning and O’Neill all added further points. Goals from Cunning and Elliott within the space of a minute put the match beyond doubt. Cushendall were reduced to 14 men when McManus saw red for an off the ball incident.

Shiels and Nicky McKeague added points to open up a 12-point gap and although Cushendall added those two late goals, Dunloy were not to be denied another championship title.