Former AFL starlet Cian Hanley back in the Mayo fold 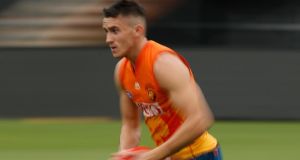 Cian Hanley has joined the Mayo fold after departing the Brisbane Lions in the AFL earlier this month.

The 21-year-old has spent the last three years with the club, who up until last year his brother Pearce was also playing for, but due to personal reasons he opted to return home to Ireland.

Hanley has been present at Mayo training this week, but has yet to take part in a session and is not expected to feature this weekend against Dublin.

The former Mayo minor captain was a category B rookie for the Brisbane club in 2014, but has struggled with injuries since. Prior to his arrival he tore his ACL during the the All-Ireland minor semi-final defeat to Kerry. He then missed most of his second season with groin problems.

Last year he returned to Ireland on compassionate leave following the death of his younger brother Tommy to cancer.

“The club has been unbelievable, I’m very appreciative of what they’ve done over the last while. It’s no fault of theirs I’m going home,” Hanley told the AFL club’s website.

“It’s just more me and personal reasons and I just think it’s the right time to go.”

“Cian has been one of our hardest workers over the last three years particularly, overcoming injury and personal adversity with such a professional attitude, it is very sad to see him go home. We will miss his infectious smile, his positive attitude and bubbly contribution to our club. We wish him a safe trip back home to Ireland where he will reconnect with his family.”

Mayo take on Dublin in Castlebar on Saturday night. Last year’s All-Ireland finalists have won just one of their three league games, and are the lowest scoring team so far in Division One. Hanley played in the half forward line for the Mayo minors and will be a welcome addition to this year’s panel.