Kilkenny plough through faltering Waterford for first win of campaign 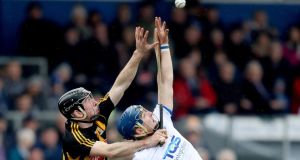 Anyone doubting Brian Cody’s continued appetite for the arena would have been reassured by his post-match demeanour in Walsh Park on Sunday. Although half of the team he had just watched comfortably defeat Waterford have yet to start in the championship their zeal and industry was straight out of the county’s manual written in better days.

On a soft and wet pitch, before a crowd of 5,859, Kilkenny threw themselves into the fray and Waterford looked laboured by comparison.

Cody’s team were picking up their first points of the season and did so by building on their hard work with an energetic short game – keeping long ball away from the dominant hand of Tadhg de Búrca – full of supporting runners and pop passes and complemented by some impressive shooting.

Martin Keoghan, who had scored 0-4 from play off the bench against Clare in the previous round, went one better on this occasion and his haul included some fine flourishes – the second steered over as he was being pressurised on the right sideline in the 31st minute.

Opposing manager Derek McGrath said afterwards that although they have been scheduling their preparations with a long year in mind, they had equally targeted a performance in this match, but in the end were disappointed and are now marooned on no points with more than half the fixtures played in Division 1A.

He said that it was the first time this campaign his team had faced an “all-out, seven backs defence”.

Their scoring returns are also inadequate at the moment and more than half of their scores came from placed balls. As usual Pauric Mahony led the way in that regard, although again his accuracy wasn’t at the gold standard associated with him. Aside from his 0-7, no other Waterford player managed more than a point until replacement Tommy Ryan scored an injury-time goal.

The only score from play in the whole first half was from the back – the excellent De Búrca, who followed a terrific catch with a solo and point from distance.

Most of the forwards, notably Maurice Shanahan who struggled in the conditions to find the shooting space he usually manages, were out of sorts, although Tom Devine’s tussle with Pádraig Walsh on the edge of the square was a good contest.

If the match had a turning point it might have been when Waterford trailed 0-4 to 0-8 with just half an hour gone. Devine got the better of Walsh but Eoin Murphy saved smartly before the ball travelled to the other end where TJ Reid pointed to put five between the teams.

McGrath made two changes at the break: replacing Austin Gleeson and Mikey Kearney, neither of whom had been thriving with Patrick Curran and Colin Dunford, both of whom scored but neither of whom radicalised the second half.

Waterford did respond well on the resumption and halved the six-point interval deficit, 0-5 to 0-11, to 0-9 to 0-12 but Kilkenny’s energy and movement was beginning to threaten. Pat Lyng didn’t score but his work-rate drew plaudits from his manager afterwards.

As in the home defeat by Wexford on the opening day of the season, Waterford’s second-half comeback was stopped in its tracks by a goal: Lester Ryan’s measured ball into Reid setting up a 52nd-minute terrific finish by the returning Ballyhale marksman.

Momentum might have tilted differently had an almost immediate penalty – for Murphy’s lunge on Curran – been better realised than Stephen Bennett’s tame enough shot straight at the Kilkenny goalkeeper, who stopped it.

The winners’ finishing was fitful though – they had more wides than the home side – but they had a 10-point, 1-19 to 0-12, lead by injury-time before Ryan’s goal and a final free from Reid.

Cody said that he was pleased with how the newcomers were knitting into the team.

“Absolutely, because if you look at the team there is an awful lot of new players out there. We had very little experience in the team for the last few matches and if the young fellas weren’t bedding in, we wouldn’t be competitive at all.”

He added that former Hurler of the Year Richie Hogan was still a while away from full recovery from a back injury.