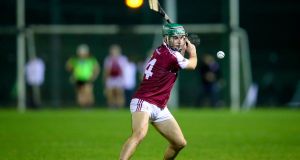 Evan Niland: against Tipperary on Sunday he scored 0-14, all but one coming from placed balls. Photograph: Tommy Dickson/Inpho

No rest for the winning. Like any manager treading on the soft ground of spring hurling, Shane O’Neill is careful and content to take each game as it comes – the next game taking Galway on a six-day turnaround and seven-hour 520km round trip to Wexford Park.

With the possibility of extra-time, if required, and further still a “winner on the day” scenario, it could make for a long Saturday afternoon – throw-in set for 3pm.

It will also be Galway’s fourth game in four successive weekends – Sunday’s 16-point swing against Tipperary at Pearse Stadium in Salthill, postponed last month because of Storm Dennis, setting up the league quarter-final against Wexford, who have enjoyed a weekend off in the meantime.

O’Neill is not complaining: in his first season of Galway since stepping into the revered boots of Micheál Donoghue, the Limerick native has been naturally keen to try out as many different players as possible – and on that front the more games the better. To date O’Neill has used 31 players, some showing their hand more than others.

“We have been taking every game as it comes, trying to create that competitive squad, but looking forward to Wexford,” he says. “We used five subs again against Tipperary, and I think used five subs every week we’ve played, which has been great. Guys are getting serious game time, and there’s great competition for places.”

Of those newcomers, forward Evan Niland has been showing his hand from the placed ball and also from play, and certainly giving O’Neill some further assurance. Niland has in part been deputising for the injured Joe Canning, who featured in the earlier rounds and scored 0-19 (0-14 frees, one 65), before missing out on the last three games against Waterford, Cork and Tipperary with a calf muscle injury.

Niland came off bench against Waterford and Cork, then started against Tipperary on Sunday, helping himself to 0-14, all but one coming from placed balls. Better still eight of those scores came in the first half, when Galway were playing into the face of the wintry wind, and at times desperate for any score.

“He can do very well from play too, in fairness to him,” says O’Neill. “Look, he’s a fabulous stick man, especially in these conditions, he was superb.”

The 21 year-old from Clarinbridge clearly has some room for further physical development too: he’s scored 0-18 (0-17 frees), more than Cathal Mannion (1-12, 0-3 frees) and Conor Whelan (3-6). “With the league, just said we’d see how we were going, from game to game,” adds O’Neill. “And so far it’s been going fairly well, trying to create that competitive squad for the championship. We’d a lot of niggles and injuries too, so we’ll have to see where a few players stand, but you can’t beat competitive matches.”

Of further satisfaction for O’Neill will be the form of Conor Whelan and Brian Concannon, who operated mostly as a two-man full forward line against Tipperary: Whelan, arguably Galway’s best forward in their short championship summer of 2019, finished with two goals on Sunday, while Concannon, who did start all four of Galway’s championship games last summer, appears to have kicked on again, scoring four excellent points from play.

“He’s trained extremely hard, and has been extremely sharp, very good for Galway last year too,” O’Neill says of the Killimordaly man. “He’s played a lot of the colleges games this year too, with the NUIG guys. And we’ve been trying to manage then, but he can be a real thorn in the side, yeah.”

Other Galway players adding strength to the depth of O’Neill’s panel are half-backs Fintan Burke and Shane Cooney. Wexford, who haven’t won the league since 1972-1973, will be primed to provide the latest test of it. They meet in the quarter-final for a third successive year: Wexford won by 1-23 to 0-23 in 2018, Galway won by 3-21 to 3-11 last year.

No rest for the winners.