Eamonn Fitzmaurice poised for another term in Kerry 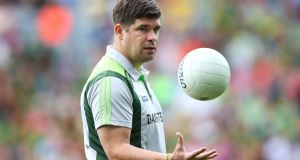 His four years in charge officially ended with the two-point defeat to Dublin in the All-Ireland semi-final last Sunday week, although Kerry GAA chairman Patrick O’Sullivan had already indicated his hope and confidence that Fitzmaurice would remain on.

It now appears certain Fitzmaurice is willing to extend his term for at least another year, given the fact that the reappointment is now poised to go before club delegates this evening.

Last October, when only agreeing - or else asking - for a one-year extension to his term, Fitzmaurice himself hadn’t looked past 2016: “Possibly, but today isn’t the time for that,” said Fitzmaurice, in the immediate aftermath of the defeat to Dublin, when asked would there be retirements both on the field and on the sideline. “There’ll be a lot of emotion after that effort, but I would encourage everyone to take stock. For me, too, that’s for another day. I was only hoping to win today, and be back here in three week’s time.”

Fitzmaurice did shake up his backroom team last October, in the wake of the 2015 final defeat to Dublin. Trainer and selector Cian O’Neill departed to take over as manager of Kildare, while three-time All-Ireland winner Liam Hassett came on board as a selector alongside Mikey Sheehy and Diarmuid Murphy, with Padraig Corcoran from Dingle also coming on board as the new trainer/selector, and it’s likely that backroom team will also stay intact.

“Obviously the defeat (to Dublin) was very disappointing and Eamonn and the rest of the management need time to reflect,” O’Sullivan told The Kerryman newspaper. “Eamonn has done a wonderful job in his four years in charge. He has won four Munster titles, won an All-Ireland title and contested another, as well as a League final. He took on the job when there weren’t too many others were queuing for it and in what was supposed to be lean times for Kerry he has kept the team competing at the top end every year.”

Even by Kerry’s own high standards, Fitzmaurice’s record over the past four seasons certainly isn’t bad. In the All-Ireland championship series, Kerry under Fitzmaurice have played 11 games, won eight and lost three - the problem being all three have been to Dublin (the 2013 All-Ireland semi-final, the 2015 final, and now the 2016 semi-final).

Still, those three successive championship defeats to Dublin are the only championship games Fitzmaurice has lost as Kerry manager, meaning his summer has always ended either losing to Dublin or winning the All-Ireland. That is clearly something he wants to address.

There are still some expected retirements for the likes of Aidan O’Mahony (36), Marc Ó Sé (36) and Kieran Donaghy (33).

1 Gerry Thornley: Consistent trailblazers New Zealand once again ahead of the posse
2 Ken Early: PSG would be sensible final move for Ronaldo
3 My sporting disappointment: Jimmy White and the elusive World Championship
4 Rory McIlroy: Maybe I’m just not as good as I used to be
5 Andy Sullivan fights back tears as he wins English Championship
Real news has value SUBSCRIBE