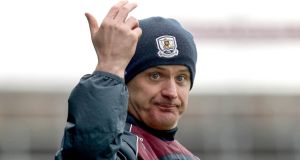 Ironically, Micheál Donoghue in the space of 70 minutes wrecked his studied, low-key approach to the season. The Galway manager watched his team annihilate All-Ireland champions Tipperary in the league final and with the latter having unexpectedly lost their Munster title last weekend, the Westerners are now installed as All-Ireland favourites.

Donoghue accepts that the Galway players are now at the right stage of their careers to mount a serious challenge.

“I think they’re at an age where they’ve gone through a lot in the last number of years and they’ve had some good experiences and a lot of learning experiences.

“I think they’re just coming into a good time in their lives for it and they’re probably at a good age now to push on again and they’re a very committed, diligent bunch and really ambitious. They’ve had a good finish to the league and all the preparation has been getting ready for the 28th [of May] and we’re really looking forward to that.”

The opening championship match, a provincial quarter-final, comes on Sunday against a Dublin side that was relegated in their league campaign – as Galway were last year. It is the ninth season of Galway’s residency in Leinster, an experiment he believes to have been beneficial.

“Oh yeah. The whole objective from Galway’s perspective, getting into the Leinster championship, was to get more competitive games and that’s gone well for the last seven or eight years – obviously they won it in 2012.

“It just gives us competitive games. The whole goal is to try and get into the All-Ireland series. I think Leinster is very competitive. There are lots of teams where there’s very little between them and I know it’s a cliche but you literally just have to take one game at a time and see where you go.”

* It was confirmed on Thursday that Dublin’s Philly McMahon would not be appealing his one-match suspension, imposed by the Central Hearings Committee, for verbal abuse of referee Paddy Neilan at the end of April’s league final defeat against Kerry. The All-Star defender will as a consequence miss the Leinster quarter-final against Carlow in Portlaoise next week.