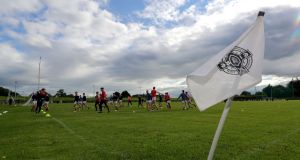 The CPA says “more than ever we need strong leadership, direction and action”. Photograph: Bryan Keane/Inpho

The Club Players’ Association (CPA) has called on the GAA to re-engage on the matter of the fixture impasse over the coming two weeks, warning that “if a satisfactory set of fixtures cannot be agreed then this totally unnecessary and poisonous atmosphere will further escalate and damage our association (GAA) even further”.

In a statement outlining a number of requests, the CPA also asks the GAA to call a special congress, “remote if necessary”, before the end of 2020 “so that any agreed change may be implemented in time for 2021”.

“We ask that Central Council should rule, as is its authority (under rule 3.38 TO 1), that there is full representation. We are calling on the leadership of the association to give clarity to their members within the next two weeks on how they plan to resolve the crisis” and “if they are prepared to take on board our suggested solution”.

The CPA also said it was its view that the GAA needed to use its time to recalibrate the season.

“More than ever we need strong leadership, direction and action. The association was able to take swift and decisive action on fixtures as we faced the coronavirus threat. When coronavirus ceases to be a threat the fixtures problem of our own creation will still be with us. and will not have gone away.

“The GAA has proven it can take decisive action. The question is now does it want to because faced with drop-out, disillusionment and dissent we need to stop this problem in its tracks, eliminate the problems at source, and flatten the fixtures curve.”

Since its formation in 2017 the CPA sought the establishment of an independent fixtures review body, similar to the strategic review committee established in 2002 under the chairmanship of Peter Quinn.

“Eventually a task force was set up and we agreed to participate in spite of the fact that it was not of the independent nature we had requested”, and “the CPA saw no meaningful alternative and thus withdrew from the process”.

The CPA added: “The crises in fixtures is one of the primary causes of the financial difficulties because the cost of team management at both club and intercounty levels is unsustainable.

“The predominance of intercounty activity has led to an erosion of the association’s core values as a community-based Gaelic games and culture organisation and to a diminution of the club games programme. It has also led to the unnecessary ongoing friction between club and county over the availability of our elite players.”

It further requests the GAA to “draft a national games programme by designating periods to club, intercounty and third-level; once the designated periods are agreed, design competitions to fit within those time windows”.

“Such structures should be set out in a manner that will ensure that there will be no conflict for players between the various groups. Publish the proposed plan to all clubs so that they may decide on the outcome.”