Ciarán Murphy: Dublin need to find out if Comerford can replace Cluxton 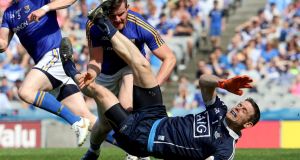 The question of whether Stephen Cluxton should play on Sunday next is about as fevered as debate is going to get ahead of the Leinster senior football final. The rib injury he sustained in the win over Longford was initially set to keep him out for a month, but manager Jim Gavin refused to rule his captain out while speaking to the media this week.

If Dublin win as expected (and that phrase seems hardly fit for the level of expectation that that will be the result come 5.30pm on Sunday), then they will play four times in five weeks between the 14/15th July and the 11/12 August to get to an All-Ireland final.

Giving Cluxton another three weeks to get over his injury to ensure he’s ready to play a full role in that part of the season, the meat and drink of the year as far as Dublin are concerned, would appear to make a whole heap of sense.

But there is another reason, beyond protecting their most important player. There doesn’t appear to be any question that he can change our expectations of how long an intercounty career can last, and in fact no one would be particularly surprised if he played on for another two or three seasons, even into his 40th year. But the fact remains that he turns 37 this December.

There will come a time when he is no longer the Dublin goalkeeper. And if a player has revolutionised the game to the extent that Cluxton has revolutionised Gaelic football, it’s fair to ask how you would go about attempting to succeed him.

The role of sub goalkeeper, under Cluxton particularly but even generally, is a strange one. More often than not, an acceptance that you must not challenge the incumbent is the key to a harmonious relationship between you, the man in position, and team management. All of the things you expect and want from your outfield subs, to constantly pressure and coax more from the starting XV, is not necessarily what you want from your sub keeper.

It’s hard to remember a Gaelic football team (or a soccer team, for that matter) with real competition for the number one jersey which has actually benefited from that competition. What is required in most teams is a sub-keeper with an understanding of his position in the world, much like former Liverpool goalkeeper Pepe Reina’s status in the current Spain World Cup squad, which is basically that of “vibes man” – like Bez from the Happy Mondays, but with even less actual responsibility within the group.

The inference around Dublin club football has always been that Cluxton has never really wanted competition for places – or at least, competition for his place. It seems bizarre Cluxton would have played all eight league games for Dublin in 2017 for instance, and yet he did.

There is an alternative view of course, one that explains why Cluxton might be right to guard his position on the team as jealously as he appears to do. Succession plans are all well and good, but they are a slave to results.

For years we watched enviously as Brian Cody was able to keep young, supremely gifted players in reserve while they waited for their chance. Richie Hogan and TJ Reid are the two most-used examples, but it wasn’t as if they were kept on the bench as part of a specific plan for their own careers – it was just how it was done.

Winning teams have that luxury. Now you see a situation where Cody threw young player after young player into the team during the league this year, and it’s gone okay for him so far. But you could hardly say it was part of a broader plan – he was reacting to the realities of the situation. Maybe Gavin sees Stephen Cluxton as Dublin’s best goalkeeper, and he’s going to reap the whirlwind of his extravagant talent for as long as he can, succession plans bedamned.

Cluxton’s replacement in the Longford game, Evan Comerford, did at least play two league games this year, against Galway and Monaghan, and even if Galway put him under serious pressure when kicking into the inevitable gale blowing in Salthill that day, he did very well with the Dublin Under-21s last year. And he’s a left-footed kicker too, which is helpful in mirroring Cluxton’s preferred kick-out angles.

So he’s been blooded a little more thoroughly than has been previously been the case, but this seems to be a gilt-edged opportunity for him to get real championship experience under his belt in a game that seems like it matters, even if the result should be beyond doubt even taking into account any malfunction that might occur.

Comerford is a fine goalkeeper and could well be the answer. Finding that out before Cluxton retires would be a worthwhile exercise.