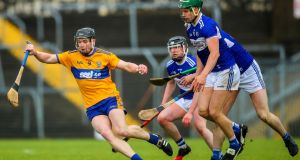 Tony Kelly of Clare in action against James Ryan of Laois during the Allianz Hurling League Division 1B match at Cusack Park in Ennis. Photograph: Tommy Dickson/Inpho

Brian Lohan’s Clare kept their unbeaten Allianz Hurling League run intact, when they had eight points to spare over Laois in Division 1B at Cusack Park in Ennis on Sunday.

Played in atrocious conditions, this game was competitive up to half-time, when the hosts went in 0-9 to 0-4 ahead. Clare upped their game in the second period and ran out worthy winners in the end.

Despite the wind rain, sleet and hail, underfoot conditions were reasonably okay and credit must be given to the Ennis venue’s ground staff for the state of the pitch. Nevertheless, the weather made it difficult, to say the least, in allowing free-flowing hurling.

Clare showed early flourishes and by the eighth minute had amassed a five points to one lead. Scores by Aaron Cunningham – returning after a three-year absence – Tony Kelly, Aidan McCarthy and a then brace from the in-form Kelly were replied to by a Ross King effort from a free early on.

Laois lost midfielder Colm Stapleton to an injury after 11 minutes of play in a period of extreme weather. King fired over another two points coupled with a Willie Dunphy score, while Banner corner back Jack Browne also got on the score sheet to make it 0-6 to 0-4 after 24 minutes. Clare finished the half in flying form with Kelly adding three more before the whistle.

Ross King opened the scoring in the second half off with a pointed free from halfway and moments later Clare sub Domhnall McMahon converted a hand-pass by Seadhna Morey.

Laois were almost in for a goal when James Keyes forced goalkeeper Eibhear Quilligan into a fine save and from the rebound Dunphy was unlucky not to find the net as corner back Liam Corry came to the rescue.

Those misses came back to haunt the Midlanders as Clare substitute Aaron Shanagher hit three fine scores as the Banner’s experience began to exert itself. Kelly had the freedom of the park and was equally successful from play and placed balls to earn himself, the man-of-the-match award for the third game in a row.

Lohan expressed his pleasure with the win and performance of his charges when he said. “It was good to get the win. At half-time it wasn’t looking great but there were very rough conditions. It was hard to strike, not to mind score.”

It was put to the former All-Ireland winning full back that his team seemed to play better in the second half against the wind. “That can happen sometimes,” he mused. “It kind of opened up a bit. Laois kept a good few guys back. But Aaron Shanagher coming in for us was a big option in the air inside, in the second half.”

Laois manager Eddie Brennan was forthright in his assessment of his team’s display. “It was disappointing when you put in the shift we put in, in the 35, 36 minutes. You’d have said we were in a good position to go after that match but look, I’ve played in a few matches like that. But I suppose I’ve never experienced anything as bad.”