McCarthy confident Howard ready to take next step with Dublin 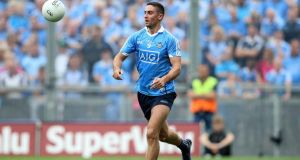 James McCarthy: “The biggest compliment I could give of Brian [Howard] is to say how hard he works and how much he wants it. He’s playing great stuff at the moment.” Photograph: Gary Carr/Inpho

By this stage last year, only one Dublin player had started all of their games, from the beginning of the O’Byrne Cup to the concluding stages of the National League: Niall Scully.

As things panned out, Scully made the most starts for Dublin in 2017, lining out in 16 of the All-Ireland champions’ 19 competitive games in all competitions, and he proved their big find.

So far this year, just one player has started all of Dublin’s games in the same time frame, from the beginning of the O’Byrne Cup to the latter stages of the league; Brian Howard. The young Raheny man, capable of playing in a variety of positions, is shaping up as the find of 2018.

Perhaps that shouldn’t surprise us because no less a talent than Diarmuid Connolly picked out Howard, who came on twice in last year’s Championship, for bigger things.

“Keep your eye out for one guy, he’s a lad from Raheny, Brian Howard,” said Connolly last December.

James McCarthy is another ever-present in the league this season and he offered a similar assessment to Connolly’s of the player who lit up the concluding stages of last year’s All-Ireland U-21 championship. Asked if rookie Howard can do in 2018 what Scully did in 2017, McCarthy nodded enthusiastically.

“Absolutely, yeah, he has all the talent in the world,” said McCarthy at yesterday’s announcement that Ballygowan and Energise Sport have renewed their partnership with Dublin GAA as official hydration partners.

“The biggest compliment I could give of Brian is to say how hard he works and how much he wants it. He’s playing great stuff at the moment. He definitely has the attitude, if he keeps going the way he is there’s no reason he won’t be there [in the summer].

“He’s another brainy footballer, high skill level. He knows what he’s doing and he’s well able to look after himself too. He’s doing well.”

Another regular in Dublin’s ranks as they close in on their sixth consecutive league final appearance is, unsurprisingly, Stephen Cluxton.

The message from manager Jim Gavin has been simple; when fit, Cluxton plays. That’s not so good for those behind him trying to get a slice of the goalkeeping action and Cluxton has seen off a long list of contenders to his throne since his debut in 2001.

Sean Currie and Evan Comerford, both from the same Ballymun Kickhams club as McCarthy, have tried and failed to dislodge Cluxton though Comerford, the current Dublin deputy, at least has time on his side.

Some have been surprised that Gavin hasn’t given Comerford a chance in this year’s league, if only to get a look at what their Plan B will look like in the event of the veteran stopper picking up an injury.

“It can be tough, but it’s a great position to be in as well, you’re learning from the best ’keeper to ever have played the game,” said McCarthy.

“He [Comerford] is in behind him and unfortunately I suppose for Evan he’s playing as good football as he’s ever played. Stephen drives standards and he’s such an important player for us and he’s obviously the captain. I’d just be telling Evan to hang tough and to learn and hopefully you’ll get your opportunity in the next couple of years.”

Presuming Cluxton is selected again on Sunday, he will come up against a familiar foe in the shape of Kerry. An 11th consecutive win for Dublin, in the league and Championship, would leave them on the brink of another final though it was Kerry that inflicted that last defeat in last year’s decider.

The Kingdom look a different team 12 months on, full of youthful vigour.

“Obviously it’s a glamour fixture,” said McCarthy of the Croke Park tie. “They’re coming with a really good team again. They seem to have a bunch of players from their four All-Ireland-winning minor teams, they’re bedding in really well and it’s going to be a big challenge for us.

“We’ll have to be on our toes. Obviously Sean O’Shea seems to be doing really well and David Clifford and Michael Burns, these are all new guys and we haven’t come across them before so we’ll have to get ready for them.”