Abandoned GAA leagues and restructured championships on the cards 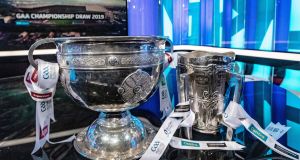 The re-introduction of a knock-out format for the All-Ireland championships may well be considered. Photograph: Inpho

A major revamp of the GAA season will have to be considered with abandoned leagues and restructured championships on the cards.

These possibilities arise as the association reviews its position after Thursday’s announcement that the country would be subject to nationwide restrictions until the end of March.

The outlining of emergency measures came as an inevitable conclusion to a week of intensifying concerns about the spread of coronoavirus.

Sports organisations have all along been following the policy of being guided by public health authorities and up and down the country, organising committees for the various national league fixtures were planning contingencies for matches going ahead or being played behind closed doors.

The latter solution wasn’t considered desirable for a couple of reasons: control of those seeking to attend, concern for players, who would be in close proximity for well over an hour of physical contact and the necessity to act and be seen to act decisively.

The decision, announced later in the day, that all Gaelic games activities would be halted provides a clean break in schedules and will allow time for the relevant GAA officials to plan what to do with the remainder of the season.

“In all of this, public health is the first priority,” said one source, “and then second, business and people’s livelihoods. Sport comes third. We’ll be sitting down between now and 29th March to work out where we go from here.”

That will be no small detail. Despite the ravages of the weather, the leagues were within a couple of weeks of being concluded. Allowing for what even at this stage looks the benign interpretation that things will be significantly improved by the end of March, there is simply no room to find those weeks for the league.

It might be possible to defer the various divisional finals until later in the year but Division 1 of the hurling league is only at the quarter-final stage. Mobilising April, the month advanced as an inter-county-free zone in the past two years, does not appear to be an option.

First, it was created to benefit clubs and their players and there is no appetite to infringe on that except for maybe a couple of fixtures that might give clarity to next year’s league. Secondly, it would only arise as a possibility if there was a lifting or partial lifting of restrictions by the end of March - a prospect not viewed as a likelihood by any of the stakeholders.

There is, counter-intuitively, less interest in the destination of the prizes at stake in the league than in the orderly resolution of the competition’s composition for 2021 - essentially, relegation and promotion issues.

As for championship, it wouldn’t be hugely affected were the 29th March to prove the end of restrictions but in the more likely event that the public health situation still isn’t resolved more radical measures will be required.

There is a desire to finish the All-Irelands by the scheduled dates, as not to do so would compromise club fixtures up and down the country. If maintaining that schedule requires the re-introduction of a knock-out format, last exclusively seen 24 years ago, that may well be considered.

One of the more contentious aspects of the championship has been the establishment of the Tailteann Cup, a graded football championship for counties in Divisions Three and Four of next year’s league.

Immediately there is the problem that as the league has not been concluded, the composition of those divisions is as yet unknown. Again, this will come down to how soon the season can re-start. Were it possible in the event of even slightly eased restrictions, a couple of relevant fixtures could be staged behind closed doors to give definition to the situation.

Realistically, though there may be no option but to abandon this year’s leagues and defer the introduction of the Taliteann Cup until 2021.