Fallen sporting heroes of 2016 never to be forgotten

A look back at some of the sporting heroes who died in 2016. Video: Reuters 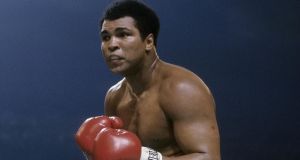 Born Cassius Marcellus Clay in Louisville, Kentucky, the son of a house painter, the man who would change his name to Muhammad Ali, was indisputably one of the most influential sportsmen in history.

Ali – who was nicknamed “The Louisville Lip” and also self-proclaimed as “The Greatest” – was an accidental boxer, taking up the sport after his new bike was stolen. As an 18-year-old, he won the gold medal at the 1960 Olympics in Rome after which he turned professional and so started a golden career that saw him crowned world heavyweight champion within four years after he defeated Sonny Liston in an upset.

A man of principle, his refusal to be conscripted into the US army citing conscientious opposition to the war in Vietnam led to his arrest and conviction for draft evasion (subsequently overturned on appeal) but he was stripped of his world titles and didn’t box for four years. On his return to boxing, Ali earned a title shot with champion Joe Frazier – losing – but regained the world heavyweight title in 1974 when he defeated George Foreman in Zaire, a fight dubbed “The Rumble in the Jungle”.

Ali was ranked the greatest athlete of the 20th century by Sports Illustrated magazine and The Ring magazine named him as “Fighter of the Year” on no fewer than six occasions.

One of the first genuine superstars of the sport, Arnold Palmer’s swashbuckling ways was responsible for popularising golf as it moved into the television age.

Charismatic and good looking, Palmer – nicknamed “The King” – won seven Major championships in his career but his impact on the sport was immense. Following his death in September with heart complications, his golf bag was positioned on the first tee at the Ryder Cup in Hazeltine as a mark of respect.

As Tiger Woods tweeted at the time of Palmer’s death, “your philanthropy and humility are part of your legend. It’s hard to imagine golf without you or anyone more important to the game than the King.”

One part of the so-called “Big Three” – along with his great friends Jack Nicklaus and Gary Player – Palmer’s career on the PGA Tour spanned more than six decades during which he won 62 tournaments. He dominated golf for six years from his breakthrough Major win in the 1958 to the 1964 Masters, where he claimed his seventh career Major.

Palmer received the Lifetime Achievement Award from the PGA Tour in 1998 and, in 1974, was one of the original 13 inductees into the World Golf Hall of Fame. 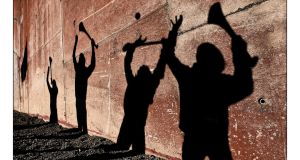 Gallery: Shots of the year

A man of the people, Anthony “Axel” Foley – who died aged 42 in October – was a towering figure in rugby who represented his club Shannon, province Munster and country Ireland with great distinction.

As a player, he won five All-Ireland leagues with Shannon, captained Munster to their first Heineken European Cup win in 2006 and scored a try for Ireland on his debut against England in 1995 from a quickly taken tap penalty. He won 62 caps for Ireland, including three as captain, in a career that extended up to the Six Nations in 2005 when he won his last cap against Wales.

Affectionately known as “Axel”, a name he was given from the character played by Eddie Murphy in the film Beverly Hills Cop, the number eight had a magnificent rugby brain that invariably had him in the right place and in the thick of the action on the pitch.

When his playing career finished, Foley  moved into coaching, initially as forwards coach with Munster in 2011 – a role he also filled in the Ireland set-up in 2012 – and in 2014 he succeeded Rob Penney as Munster’s head coach.

Christy O’Connor snr – who died in May at the age of 91, just months after the death of his nephew Christy jnr – was a golfing giant. Affectionately known as “Himself”, the Galway native was a multiple winner on tour in Europe and made 10 appearances in the Ryder Cup.

If his “biggest regret”, as he described it himself, was never to win a Major championship (he had 10 top-10 finishes in the British Open through his career), the fact was that O’Connor refused many invites to play in the Masters at Augusta due to the cost and the time it would involve travelling.

But he achieved many great things on the golf course, including winning the Harry Vardon Trophy for topping the European order of merit in 1961 and 1962.

O’Connor was a trailblazer who proved to be an inspiration for the many Irish golfers who followed on to the professional circuits. He partnered his great friend Harry Bradshaw to victory for Ireland in the Canada Cup (now called the World Cup) in Mexico in 1958 and other notable achievements included winning the first £1,000 prize cheque on tour when he claimed the Swallow Penfold tournament in 1955 and then won £25,000 (the biggest prize fund in golf at the time) for his victory in the 1970 John Player Classic.

One of a family of 11 from Knocknacarra, outside Galway city, O’Connor had a swing honed by many hours spent practising. He was inducted into the “Hall of Fame” in 2009.

Indelibly linked with the legendary Epsom Derby winner Shergar, a horse for the ages, Walter Swinburn was one of Europe’s outstanding flat jockeys from the late-1970s into 1990s.

Known as “The Choirboy” for his angelic youthful looks, Swinburn had shown sporting talent of a different kind when playing as a scrumhalf during his secondary education at Rockwell College. However, the son of a jockey, horse racing was in his blood and he left school at 15 to purse a career where those quick hands with the oval ball were destined to softly guide numerous classic winners pass the post.

In all, Swinburn rode more than 60 major winners – including three Epsom Derby successes, two Irish Derby wins and one Prix de l’Arc de Triomphe – before his ongoing struggles to make the weight led to him retiring from the saddle by 2000.

Shergar was an odds-on favourite when winning the 1981 Derby under Swinburn by 10 lengths, the horse’s name brought to wider audience outside of racing when it was stolen from the Aga Khan’s stud farm in Co Kildare in 1983. Swinburn was only 19 years of age when he rode Shergar to victory in Epsom, a horse he described as “the best ever”.

Swinburn – born in Oxford but who grew up in Ireland – notched up many classic wins after that breakthrough success with Shergar, including two other Derby winners, Shahrastani (1986) and Lammtarra (1995), and won the Prix de l’Arc de Triompher on All Along in 1983.

Eric Cantona observed of the Dutch maestro, “he was at the heart of a revolution with his football.” And, in Johan Cruyff, known as “The Saviour” for his initials JC, there was – as a player and manager – a footballing philosophy and style that made him one of the most influential figures in the game.

As a player, Cruyff won nine Dutch championships, three European Cups, one Spanish league title and a World Cup runners-up medal, and 48 caps for the Netherlands between 1966 and 1977. As a manager, he won a European Cup, two European Cup Winners’ Cups and four Spanish League titles.

Although positioned as a centre forward, Cruyff more often than not was the orchestrator as well as the finisher of moves that left opponents mesmerised by his wizardry and energy.

Cruyff helped Ajax dominate Dutch football for a decade before bringing his wizardry to play with Barcelona. His football philosophy of “total football” inspired Ajax and Barcelona to establish youth academies.