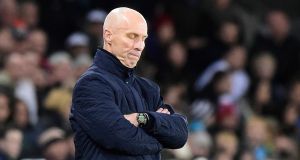 Bob Bradley has been sacked by Swansea City after only 85 days in charge, bringing an end to a brief and disastrous spell as manager that yielded only eight points from 11 games.

Swansea had been determined to give Bradley the January transfer window to strengthen the squad he inherited when he took over in October but the crushing Boxing Day defeat at the hands of West Ham United, and the supporter unrest during the second half of that match, left the club’s American owners with no choice but to act.

Alan Curtis, the first-team coach, and Paul Williams, the assistant manager, have been placed in charge on a temporary basis as the club look for a permanent replacement. Unlike when Francesco Guidolin was dismissed in October, Swansea do not have a manager lined up to come in immediately.

Bradley’s position effectively became untenable after Swansea lost 4-1 against West Ham. A large section of the crowd at the Liberty Stadium chanted “We want Bradley out” during the game, which was Swansea’s third defeat in succession.

It was also the eighth time during Bradley’s tenure that Swansea had conceded three goals or more in a match and left the Welsh club second from bottom in the Premier League, four points adrift of safety. Bradley was viewed as something of a gamble when he became the first American to manage in the Premier League and there is no escaping the fact that his appointment has proved to be a terrible decision.

Following his final defeat, in which the visitors scored three second-half goals and fans rounded on the manager, Bradley said: “I don’t make excuses. After a game like today I take responsibility that it’s not good enough.

“Inside the dressing room we have to look at each other and accept that especially in the second half we had the chance to fight back and we weren’t able to do it in a strong enough way. At the moment we’re our own worst enemy, no matter what we do we seem to put ourselves in terrible spots.”