Extreme sports – where self-absorbed masochism gets dressed up as sport 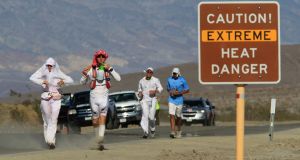 The sun is out and with thoughts turning to fresh air and exercise the plan was to tease a little about this mania for extreme sports. It was going to have lots of fatuous exaggerations, like running a half marathon backwards while pulling a grand piano with your nipples.

But when fact is more manic than fiction there’s little room for sarcasm.

Where’s the space to exaggerate when The Race Across America exists. It gives cyclists 12 days to cross a continent. They get to sleep for just 90 minutes a day. Sleep deprivation means there are official warnings about hallucinations. There are queues to do it. You can’t make this stuff up.

Or if running is your thing there’s the Marathon des Sables, billed as the world’s toughest footrace, where the deal is 150 miles of Moroccan desert while carrying food and supplies on your back. Apparently a guy once got lost for nine days. He survived by eating bats and drinking his own wee.

The Badwater Ultramarathon argues it is the toughest. It’s 135 miles and takes place in Death Valley in 54 degree summer heat. Support crews douse the racers with ice-water every 15 minutes. People can’t get enough of such coronary roulette.

Then there are the myriad of “challenges” that have never been done before, like perhaps skimming across the Denmark Straits on a biscuit tin, propelled by nothing except a kite and an ego which thinks such foolishness is something for the world to be awestruck by.

Apparently that Victorian throwback, Sir Ranulph Fiennes, has plans to walk the five miles from Robben Island to Cape Town on the seabed – in weighted boots.

Presumably that will be a first too, and an invitation to acclaim yet another arbitrary physical record no one’s done before because, let’s be honest, why would anyone want to.

Amazingly this extremism gets represented as some victory for humanity rather than a desperate cry for help.

Its fingerprints will be all over Youghal in June when Ireland’s first ever full international Ironman takes place, a reminder of the appeal ultra sports have here, and how, when it comes to endurance tests, a marathon is practically a warm-up session these days.

Competitors will swim 2.4 miles around Youghal Bay before jumping on to bikes for a 112 mile spin and then running a marathon. It once would have seemed a physical impossibility. Now it’s just part of an overall trend.

Ireland has its own qualifying heat for the Race Across America. The 10th Race Around Ireland takes place in August. Last year’s winner took five days to finish the over 2,000km event. He reportedly slept for just three hours in that time. At the finish he was “shattered”.

That seems to be the point of extreme sports, even down to these obstacle course events where there’s profitability in allowing people to “experience” what it’s like to purge themselves in mud, electric shocks and freezing bog water.

Some savvy operators stick an ancient Greek vibe on to this stuff, like Spartathlon which is a 153 mile race for those who think marathons are for wimps. Presumably they believe it brings some supposed bygone credibility to this modern appetite for ridiculous athletic suffering.

Now the usual terms and conditions apply about people being free to float their own boat whatever way they want, wherever they want, even if it involves obsessively pushing their minds and bodies beyond any sane limit of what is healthy.

If hollow convoluted displays of ostentatious misery does it for you then knock yourself out. But do the rest of us more sedentary mortals a favour and stop dressing it up as some heroic invitation to awe.

And in a world where so many have so little choice about the pain they have to endure it’s not difficult to see why so much of extreme sport comes across as a dumb fetish indulged by those best able to afford the most expensive commodity of all – time.

As a survivor of the Nazi concentration camps, Frankl knew about real suffering. After the war he wrote a spectacular bestseller which outlined his belief that a striving for meaning is our primary motivational force.

It’s tempting to suspect a western world where religious belief is marginalised, and much of politics is a busted flush, might have generated this impulse to explore endurance as a way of representing something more meaningful than sweaty ennui.

But it’s even harder not to feel that what this compulsion to push for supposed inner enlightenment through weird and extreme athletic combinations is really evidence of overwhelming boredom.

Making that point in this space last summer prompted some gratifyingly shrill well-to-do outrage. It turns out that devotees of Ironman and triathlon have a surprisingly low-pain threshold when it comes to having the mickey taken a little.

Accusations of bitterness and envy jostled for prominence with invitations to both try a triathlon before criticising it but not before performing several notably gymnastic acts upon myself. It was a reminder that middle-class self-regard doesn’t like being teased, never mind scorned.

There was indignation at any idea that choosing to pound one’s body through hours upon hours of punishment shouldn’t generate appropriate expressions of regard at how so many people are focusing on their health and personal “goals”.

Indulge all you want but don’t use reams of cod-psychobabble to turn it into something it isn’t. The reality is it’s self-absorbed masochism dressed up as sport.