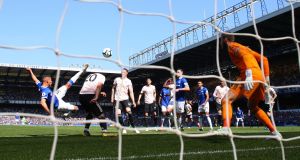 It was defeat on a sunny Easter Sunday afternoon at Goodison Park that did for David Moyes at Manchester United. And that was merely a routine 2-0 loss at the end of an era. This was a humiliation at the start of a supposed new dawn. Ole Gunnar Solskjær has inherited, and is presiding over, a shambles.

United players require a reality check, their latest manager had declared on Friday. It landed heavily on them here as Marco Silva’s slick, expansive and clinical team recorded Everton’s biggest win over United since October 1984. The embarrassment for the Old Trafford club was not confined to the scoreline. It was writ large in the apathetic displays of their over-paid players, in Anthony Martial diving for a nonexistent penalty, in David de Gea throwing the ball at a dawdling Diogo Dalot and in the visitors starting with the same central defence as in Moyes’ last stand in April 2014. There they were, Chris Smalling and Phil Jones, the latter getting himself injured yet again to add to the sense of chaotic deja-vu. At least he offered a semblance of commitment that was otherwise absent on an appalling afternoon for United. Champions League qualification is the least of their worries.

Everton were superb and battered the visitors not only physically but in terms of quality, desire and work rate too. United, fielding three changes to the side outclassed in Barcelona in midweek, were truly pathetic. A two-goal deficit at half-time flattered their spineless display.

The fear factor evaporated from United long ago yet the lack of reaction to their Champions League exit would have been galling for Solkskjær and the club’s vociferous travelling support. They are a club welcomed with open arms when calling with the chequebook and visiting on their Premier League travels these days. A third consecutive away league defeat – for the first time since January 1996 – had a feeling of inevitability once Richarlison hooked Everton ahead with only 13 minutes played.

Silva’s team continued where they left off in their last home victory against Arsenal, refusing their opponents time or space to build from the back and winning almost every second ball. Often unchallenged. United’s refusal, reluctance or inability to press their opponents in return contributed to a comfortable first-half stroll for the hosts.

The breakthrough was a replica of Phil Jagielka’s winner against Arsenal in its construction, although far removed in its execution. The excellent Lucas Digne launched a long throw towards the six-yard box where Dominic Calvert-Lewin beat Chris Smalling in the aerial challenge. Richarlison met the flick-on with an acrobatic, emphatic overhead kick that flew into the roof of De Gea’s net before the keeper or Diogo Dalot, the Brazilian’s designated marker, could react.

Richarlison’s stunning 13th league goal of the season was also the 45th conceded by United, equalling the club record for the most conceded in a single Premier League campaign. It was also their 11th game in a row in all competitions without a clean sheet, extending their worst run for seven years. Number 46 and a new unwanted club record was not long in coming.

Everton’s merited second goal stemmed from a United corner that was taken by Marcus Rashford and headed clear by Richarlison. Idrissa Gueye took over and exchanged passes with the brilliant Bernard before releasing Gylfi Sigurdsson into the United half. The counterattack slowed as the Iceland captain took time to consider his options. Sensing that a complete lack of resistance from Nemanja Matic offered the best solution, Sigurdsson stepped inside and swept a precise finish from over 25 yards inside De Gea’s right hand post. The United goalkeeper could have been sharper with his reactions – a criticism that could have been directed at everyone in pink – but Matic’s passive part in the goal encapsulated the visiting display.

Goodison revelled in Everton’s superiority as well as the toils of its former striker Romelu Lukaku on his 250th Premier League appearance, who led what was a three-pronged attack in name only. Lukaku’s defeat in a 50-50 challenge with Seamus Coleman was particularly well received.

The third was yet another outstanding finish, this time from Digne, who rifled a half volley inside De Gea’s near post after the Spain international had punched clear a Sigurdsson corner. Anthony Martial was closest to the French full-back when the ball dropped but decided against any defensive effort. Moments later Sigurdsson took another corner from the left and attempted to score. Only De Gea’s sharp reaction to volley off his own goal-line prevented Sigurdsson succeeding.

Everton’s influential No 10 fashioned the fourth for Theo Walcott with an impudent nutmeg of Victor Lindelof. Calvert-Lewin had beaten two United players to a Digne throw before Sigurdsson sent the substitute sprinting through on goal. Walcott’s first touch took him away from the target but he still had time to correct his run and beat De Gea with a precise finish.