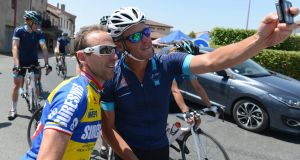 Lance Armstrong poses for a selfie as he rides with Cure Leukaemia charity riders during stage thirteen of the One Day Ahead - Le Tour 2015 on July 16, 2015 in Rodez, France. Photo: Sam Bagnall/Getty Images

What is it that people expect Lance Armstrong to do or say? The Texan spinner – of wheels, lies, deception, inspiration, delusion, truths, apologies and whatever else you want to throw into the cocktail – will be in Dublin next Friday night for a public interview.

The event has been well flagged. The ‘moral’ ambiguity of inviting Lance to the sports event has been gravely debated on the radio and putative audience members have been advised to consult their consciences before forking out their hard-earned cash to witness Armstrong whip up his blizzard of obfuscation.

We imagine armed guards wheeling the Texan onto the stage in one of those contraptions designed to contain Anthony Hopkins in his Hannibal Lecter days except that maybe Lance would still be in bike shorts and one of the yellow shirts he has made famous.

Last week, Newstalk’s Ger Gilroy conducted a half hour interview with Armstrong. It was assiduously researched and Gilroy not only managed to ignore the Texan mispronouncing his name for the entire 30 minutes but in a turn worthy of Clarence Darrow, he pushed him on every single point of his mistreatment of those around him during the years when he was trying to maintain the big lie.

Unsurprisingly, Armstrong did not buckle. In true Texan style, he stuck to his guns. But the most revealing moment came very early in the conversation, when Armstrong was asked why he had decided to come to Dublin and do the interview. And the Texan seemed genuinely surprised by the question. “Mmmmmh...well, why not?” he asked. Indeed. As Philip Roth famously declared: “when you got nothin’, you got nothin’ to lose.”

This is the more relevant thing about the world of Lance Armstrong in 2016. He has a podcast. The man has a podcast. A talk show. He is, in other words, in the media now. And it is relatively early days but Armstrong has already attracted a fairly distinguished list of guests, including Chrissie Everett, Bob Arum and Malcolm Gladwell.

The bad news, if you are one of those who loathe Armstrong, is that he gives pretty interesting podcast. He does the talking heads thing well. That shouldn’t come as a surprise. Remember Lance before the fall, when he was the king of cycling and a figurehead for spiritual and physical triumph through his Livestrong movement? Remember how many people wore those wristbands? The boy could talk up a storm. Whip-smart and loquacious and burning with that southern American sincerity even when, as he has since admitted, he was lying through his teeth about one of the most audacious sporting frauds ever perpetrated on the ever-gullible world.

And yes, he batted away the lone voices of protest – the David Walshs and Paul Kimmages and Greg LeMonds – with put-downs and threats and he used his influence and wealth to try and intimidate and silence. He said awful things about people who had been in his employ. It was clear, even if you just watched the Armstrong story from a casual distance that beneath the veneer of Lone Star State charm was a man with a bleakly vindictive streak.

And Armstrong had a vast army of followers, a vast army of millions of believers drawn from well outside cycling’s conventional fan base. The reason for this, of course, is that the Lance Armstrong story was like a children’s fable that adults were permitted to believe in. It’s the kind of story which could have been a movie, and therefore was.

How could a man who was struck down by cancer, whose body was ravaged by its effects and who was given a low percentage chance of surviving, not just beat it but recover to become the greatest cyclist of all time?

From what the experts deemed to be a death bed to this remorseless, brilliant competitor who won the prestige road race for seven consecutive summers: it was incredible. Anyone who asked questions or cast doubt on his integrity was dismissed as a cynic: as someone who lacked faith in the triumph of the human spirit. It was an incredibly attractive story.

But would that have been enough to convince the major sponsors to back him or to attract publishers and media outlets to cover his story? Not in a million years. The selling point wasn’t just that he had made it back for a grave illness, it was that he won: that he made the journey from super-weakened to super human. People wanted to believe in that. Who could blame them?

Eventually, when the lies became too complex and he couldn’t silence everyone and the doping regulators began to throw their weight into investigating Armstrong’s methodologies, the whole illusion fell apart and he came clean (sort of) on the famous Oprah Winfrey interview and that was that. He was officially disgraced.

Cycling has flitted somewhere between breathtaking sport and pharmaceutical carnival for many decades and this was just the latest, the most spectacular deceit. The sponsors fled and, with it, millions of dollars in endorsements. Legal cases are on-going. Scroll through the list of T.de.F. winners and there are sustained blank periods for both the world wars and for Armstrong’s years. The access to sponsor’s money and to other powerful people deserted Armstrong. He was stripped of much that he had acquired. But what didn’t leave Lance Armstrong was his belief in Lance Armstrong or his fascination with Lance Armstrong.

Clearly, his spirit or chutzpah has not been crushed by bearing witness to the disintegration of his reputation as a sporting great. Armstrong claims he has apologised to the many former colleagues and team-mates he hurt, humiliated and threatened etc. His attitude towards how he achieved what he did on a bike is ambivalent at best. The extent of his public remorse is deemed insufficient because there has been no Tiger Woods moment.

Even when Armstrong was found out and even when he admitted full culpability, it was always on his terms. It was never going to be any other way. Expecting or demanding that Armstrong apologise to the world on its terms is foolish. Pretending that having Armstrong sit down in front of a paying audience for an hour is anything other than a form of entertainment is naive. Armstrong will be in Dublin next week because it is another step on the road to reinvention. He has been the centre of attention for most of his adult life. He is not going to abandon that now.

As he told Newstalk of his Dublin appearance, he has done “dozens of these” appearances since his fall from grace. Why not? He presumably makes money from them. And it’s clear that he enjoys the stimulation of the debate: that he possesses the same certainty in his ability to outwit his inquisitors as he did in his ability to burn off rivals on the Tour de France.

“Every time I give a talk I say to the room: look, I’m not here to bullshit you. You ask a question I’m going to answer the question,” he told Newstalk.

That may be true – or at least what he believes to be true. The problem is that Armstrong’s truth isn’t the truth that others want or need to hear. Accept it or don’t. Listen or don’t. Go along to see him live or don’t. It doesn’t really matter. Like it or not, Lance Armstrong remains the proprietor of his version of events. He is not going to be talked out of it.