Dave Hannigan: Old ghosts still at play on a visit down memory lane 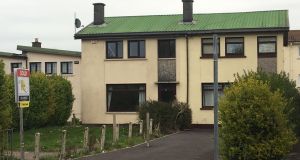 Dave Hannigan’s former family house (right) in Clashduv Park, Togher, Cork. Every time I came in from playing, my mother’s radar pinged and her voice came booming from within: “Go round the back, there’s mud on your shoes”.

I stood in Clashduv Park in the Cork suburb of Togher one morning last week.

As two of my sons and my grandnephew whirligigged from swing to slide around me, I remained rooted to the spot, staring at a pale yellow house across the street. Transfixed.

Occasionally, the boys tried to get my attention but they couldn’t break the spell. I was gazing too deeply into my past life, casting an emigrant’s mournful eye over the house that used to be my family home.

To be close enough to touch something that was once the centre of your entire universe but now belongs to somebody else is as disconcerting as the cosmetic changes to the place. The new owners paved paradise and put up a parking lot. Well, they concreted over the front garden to create space for a single car and, in doing so, took a wrecking ball to another piece of my childhood. The nerve.

My friend Stephen Mehigan and I once mowed that lawn with the avidity of Augusta National greenkeepers tending azaleas, burrowing out two holes that we filled with empty Batchelors Beans’ cans so we could while away summer playing a golf that was more putt than pitch. At least they haven’t touched the front gate over which Cork’s own Borg and McEnroe produced so many eternal rallies. Yet.

The house itself is a nondescript affair, like thousands of others built by more progressive governments in the 60s and 70s. Those were strange regimes who believed working-class families deserved decent public accommodation they could afford to rent and one day even get the opportunity to buy. Imagine.

If the construction owed more to function than flair, three bedrooms were enough for my parents to raise four children, the youngest of whom was unfortunately possessed by feverish dreams of his own nascent sporting greatness.

By right, Cork Corporation should one day soon erect a plaque on the side wall at the front, recognising its historical significance. That was where I spent hours each day lashing a sliotar or a soccer ball against the pebble dash, single-handedly disproving the theory it takes 10,000 hours to master a sport. I put in at least that in both codes but to no avail.

I blame my father for regularly interrupting my diligence by objecting to the relentless thrum and pleading for me to cut out the infernal racket. On such rocks, perhaps, do great careers falter.

Part of the reason I spent so long staring at the house is that a local intelligence source informed me our humble abode now belongs to a woman who lives there with her only son. I wanted to catch a glimpse of the boy to see if he too might be afflicted by the sporting virus.

Does he snip photographs of footballers from glossy magazines and blue tack them to his bedroom wall? Is Match of the Day each weekend still treated with the ritualistic reverence due the eighth and most glorious of all sacraments? Where does he go after his own games to shuck mud pellets from his boots without leaving a trail of dirt in his wake?

Ridiculous questions of course because it’s somebody else’s home now. Somebody else’s turn for feverish dreams. They will create different memories with which to warm themselves in the chilly dotage of their own middle age.

They won’t play darts in the small bedroom eavesdropping a crackling BBC radio signal of European Cup ties from beyond the Iron Curtain. They will never know the joy of snooker in a claustrophobic space where every shot demanded elbow gymnastics to keep the cue from hitting the wall. They may never feel a mother’s wrath when a dirty soccer ball smeared the pristine white washing on the clothes lines criss-crossing the back garden.

But one day, many years from now, that child may stand across the street from this very house and witness his own ghosts at play.

Like I pictured my teenage self, replete with Ian McCulloch fringe drooping over the eyes, coming out the side gate on a Viking 10-speed racer, an overweight school bag on the backer, a gear bag over one shoulder, and a hurley clasped precariously to the handlebars. Ready to climb the Alpe d’Huez to Coláiste an Spioraid Naoimh while attempting to retain a sniping corner-forward’s modicum of indie cool.

That particular reverie was unceremoniously interrupted by an eight-year-old in an accent that only ever sounds American to me in Ireland, tugging at my sleeve, pulling me back to the bald-headed reality of the present day with a request to be pushed on the swings.

The kid appeared disturbed by the strange grin on my face, the faraway look in my eyes. How could I explain that I could see my mother across the road, scouring the front step with a scrubbing brush and soapy water. As was her daily routine.

Back then, the matriarchs of Togher seemed curiously obsessed with the cleanliness of their front steps, as if constantly anticipating official inspection or an impromptu visit from judgemental relatives.

Every time I came in from playing, my mother’s radar pinged and her voice came booming from within: “Go round the back, there’s mud on your shoes”.

I don’t know how she knew that but she did. Somehow, she always did.

“What are you smiling at?” asked my son.

1 Keith Duggan: Through the glories and the disgraces, we were all Maradona addicts
2 Diego Maradona dies of heart attack, aged 60
3 Handful of God: Five magic Maradona moments
4 Diego Maradona: A genius and the soul of a nation
5 Andy Farrell to delve deeper into Irish squad for team to play Georgia
Real news has value SUBSCRIBE
Here is your handy guide to sport on television this week