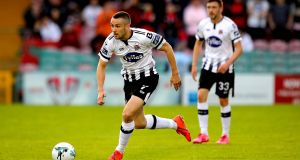 Dundalk boss Vinny Perth remains hopeful that Michael Duffy will be in Latvia in time for Wednesday’s second leg of the club’s finely balanced Champions League qualifier against FC Riga, after the Derryman delayed his departure in order to be present for the birth of his first child.

“We expect Michael to be part of the matchday squad,” he told reporters in the city on Tuesday. “He could be in tonight or in the morning. But we expected this and we have prepared with and without Michael in training over the last few days. Whoever plays tomorrow, we will be ready.”

Perth has some pretty decent options to play with in the event that Duffy does not end up making it in time but the 24 year-old’s absence would be a blow, going into a game where the Irish side’s ability to deliver on the attacking side of things will be key to their chances of progressing.

Duffy was relatively subdued last Wednesday but still produced a couple of his side’s better chances at Oriel Park in the form of driven shots that narrowly missed the target. The hosts did not actually manage to seriously test Riga goalkeeper Roberts Ozols but hope to do better in circumstances where they expect the Latvians to play a more attacking game.

The talk around the camp still centres on Dundalk’s record of producing some very big results away from home. Just short of half the results they have achieved in the away game of two legged ties in recent years would be good enough for them now and they were upbeat in the aftermath of a game last week that they felt provided a lot of positives.

Despite that, though, it is Riga coach Mihails Konevs and his men who would have been happier with the result, and the way in which they contained the Irish champions will certainly have encouraged them.

The visitors are boosted by the fitness of Chris Shields who had to be replaced at the break last week after a painful looking collision with team mate Daniel Cleary. The midfielder trained in Riga on Tuesday and is in with a good shout of starting.