Rory McIlroy: Portrush support and caddie insight will give me edge

A winner of The Players earlier this season, he’s played a light schedule in the run-up 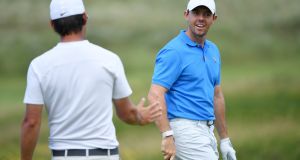 Rory McIlroy of Ireland talks with his caddie Harry Diamond during a practice round at Portrush. Photograph: Getty Images

Rory McIlroy is hoping that the huge galleries in Portrush for this 148th edition of the British Open will factor as a 15th club in his bid to win the championship - and claim a fifth career Major - on home turf.

With a sell-out attendance for the championship days, and the R&A confirming a figure for the week of 237,750, making it the second largest championship mark ever, McIlroy’s focus all season has been on this event.

“I’m from Northern Ireland and I’m playing at home, but I don’t see myself as that centre of attention, I guess. I’m here to enjoy myself. Hopefully it doesn’t take another 68 years for the tournament to come back here.

“But at the same time, I mightn’t get an opportunity to play an Open Championship here again. You never know what happens. I’m really just treating it as a wonderful experience and one that I really want to enjoy. I’m going to love being out there and having the crowds and having the support. If that can’t help you, then nothing can,” said McIlroy, who won the title in 2014 and has had top-five finishes every time he has played since then. He missed his defence in 2015 due to an ankle injury.

McIlroy, a winner of The Players earlier this season, has played a light schedule in the run-up to this championship - including skipping the recent DDF Irish Open - and has also limited the number of practice rounds, playing last Saturday week on an initial reconnaissance visit and again on Tuesday afternoon.

The 30-year-old Co Down man believes his caddie Harry Diamond will be of even more benefit this week than in a normal week, given his competitive history in playing in the North of Ireland championship: “I think that’s one of the things people don’t realise, Harry has played more rounds of golf on this golf course than I have, and definitely more competitive rounds. He reached the final of the North a few years ago. So he’s just as comfortable on this golf course as I am. So that is a big help this week . . . I think with his experience around here, my ear will be a little sharper to what he has to say.”