Darragh Ó Sé in defence of the footballing summer, visualisation key for Limerick 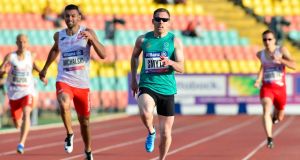 Ireland’s Jason Smyth on the way to winning gold in the Men’s T13 200m in Berlin. Photograph: Luc Percival/Sportsfile

Limerick’s All-Ireland final win over Galway brought the curtain down on a vintage summer of hurling, and provided a thrilling championship with a fitting and poignant end. The brilliance of the hurling has been used as a stick to beat the All-Ireland football championship with - however in his column this morning Darragh Ó Sé has lept to its defence, suggesting that a great hurling summer doesn’t necessarily mean a poor footballing one. He writes: “I saw somebody saying the other day that it’s time to switch the hurling and football finals around so that we can end the season on a high. But why group them together at all? They’re different sports, played by mostly different people and definitely cared about by different people. Can we not just let hurling be hurling and football be football?” It is Dublin’s inevitable slow march towards five-in-a-row which has led to many people calling the 2018 football Championship boring, however Ó Sé pays tribute to the way Jim Gavin’s side have evolved as their dominance continues. “It doesn’t help either that the Dubs have changed their style of play. They don’t take on the low percentage shots now. They don’t try to go for glory. They’re just patient and meticulous and they pick you apart bit by bit. . .I hear some people giving out about this and I get it. But I don’t agree with it. I love watching them figure out their way around opposition teams.”

Meanwhile Seán Moran has reflected on Limerick’s aforementioned win over Galway, and the way those involved were able to carry 45 years of emotional baggage with aplomb and deliver on the biggest day of all. “[JOHN] Kiely handled the challenge really well. Understandably he was jumpy about people getting carried away, but his marshalling of a young team - average age last Sunday was 23.2 - was sure-footed, which became evident in how they dealt with crisis along the way.” And one of the older statesmen of the victorious Limerick side - 30-year-old Richie McCarthy - has praised the impact of sports psychologist Caroline Currid. McCarthy, an All Star in 2013, insists her methods of visualisation played a key part in getting his side over the line: “The management and ourselves were all a bit raw getting to an All-Ireland final, but she had the experience, she told us a lot about it. Even the day before, she said if you don’t pick up the hurley the day before a game, then don’t do it. In other words don’t change your routine, which is a big thing for us.”