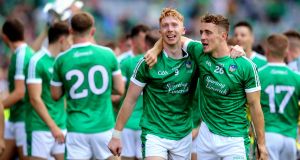 Maybe the fatwa on hype and hysteria worked. I was told last week that there seemed to be fewer Limerick flags in the city’s O’Connell Street – almost as if John Kiely had been going around at night and taking them down.

There’s no readily available metric for calculating such things, but the key impression from the moment the Limerick manager upbraided the media just after the semi-final win against Cork – in terms that he has since acknowledged were unintentionally combative – was that this time would be different.

It would be different anyway. The seriousness of Limerick’s challenge ensured that much. Cautionary tales about people getting carried away back in 2007 and getting the players out to do openings and how that wouldn’t happen again were illustrative, but in a way misplaced.

Back in 2007, Richie Bennis’s exuberant style of management tapped into the unparalleled willingness of the county to get worked up about hurling. It’s post-hoc rationalisation at this stage, but Limerick were playing Kilkenny, whose teams that year and in 2008 no one was going to beat.

Were it not for delirium cooked up along the way – remember Bennis invading Babs Keating’s television interview after one of the draws in the three-match saga against Tipperary to celebrate the glories of Munster hurling – the county may well not have qualified for the final.

The giddy abandon of the All-Ireland semi-final that year saw a Limerick team that had conceded twice as many goals as they had scored beat Waterford, whose scoring record was the other way around, by firing in five goals and conceding just two.

“We’ve done high balls and low balls and cross balls and they’ve all come up trumps today, thank God,” Bennis said in the fervid aftermath. The theory that the excitement killed them in 2007 was never as persuasive as the possibility that they wouldn’t have been in a final without it.

It’s not necessary to suck all of the joy out of the atmosphere in the lead-up to big matches in order to win, and in Limerick last week the revised view was that the players were enjoying the build-up and the public was on board.

Kiely handled the challenge really well. Understandably he was jumpy about people getting carried away, but his marshalling of a young team – average age last Sunday was 23.2 – was sure-footed, which became evident in how they dealt with crisis along the way.

He had to winnow his way through the available resources, rich as they undoubtedly are, and come up with a panel that would do justice to a county’s long-held ambitions.

It wouldn’t be true to say that they sailed serenely through their first All-Ireland final, as their shooting accuracy, hugely improved since the league, declined by almost 100 per cent, from just over 10 wides per championship match to 20 on Sunday, but they held on and had just about enough in the bank to cover Galway’s late charge.

The manager pin-pointed the league finale, also against Galway, as the most significant milestone in the year. At the time it was noted as a departure for a team that had missed out on promotion from Division 1B for six years, simply because they couldn’t beat their main competitors in any given season. That they managed to in Salthill last March was given added impact by the recovery of an eight-point deficit.

The new championship structure was also beneficial for an up-and-coming team. Playing against everyone in the province - a complete schedule which had previously taken six years - in the one season brought them along in a virtual hothouse environment.

The Munster match with Cork on the June bank holiday weekend would qualify as an equally good epiphany, because although they were a decent shot to win, Aaron Gillane’s early red card gave them a mountain to climb.

Yet they didn’t just drop from outer space as fully-formed champions. So much effort has gone on in Limerick this decade, from the school teams of Árdscoil Rís and their own scaled-down version of the Holy Grail, reflected also in the minor defeats of 2014 and 2016; to Kiely’s under-21s, who won two All-Irelands; and the impact of Na Piarsaigh in the club championship, yet to lose a match in four Munster campaigns and All-Ireland champions two years ago.

A stand-out statistic is Fitzgibbon Cup. It’s been no secret that Limerick has been its epicentre for a number of years between principally UL and Mary I College of Education but also Limerick IT.

The first two have shared the last four Fitzgibbons and whereas counties of location aren’t always the driving force of the local educational establishments, in this case no fewer than nine of last Sunday’s starting 15 played on those successful teams.

It’s no exaggeration to say that this was hurling’s most longed-for All-Ireland. Waterford have waited longer but not contended to the same extent as Limerick, who had lost finals every decade since 1973, right up to last weekend.

I remember the contrast between Wexford in 1996 and Clare the year previously. Ger Loughnane’s team were fixated on winning Munster for the first time since 1932; the All-Ireland was a bonus. In Wexford, however, living memory encompassed the previous MacCarthy Cup in 1968. The county had gone from being a contemporary power in the game – four titles in 14 years – to nothing. They knew what they were missing and felt the loss.

Limerick, the county that Eamonn Cregan used to say had won one All-Ireland since 1940 – which over time became an elastic index of misery – can now reset. For the next 12 months at least, we will refer to them as “All-Ireland champions Limerick”.