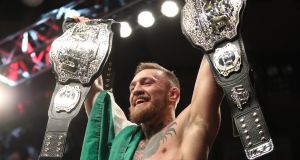 Conor McGregor’s meteoric rise in popularity shows no signs of stopping as the UFC lightweight world champion has been named Ireland’s Most Admired Sports Star of 2016.

In the PSG Sport and Sponsorship Sentiment Index, the 28-year-old MMA fighter was selected by 16per cent of those surveyed as their most admired sportsperson. Katie Taylor came in in second place with 14per cent of the vote.

However, it is McGregor’s popularity with young people that is the most striking aspect.

In a year that saw him become the sport’s first ever two-weight world champion – before the featherweight belt was taken off him due to the fact that he would not defend it – one in every three 18 to 34 year olds said he was the Irish sportsperson they admired most.

Despite the fact that soccer maintains its place as the most popular sport in the country and the impact of Ireland’s run to the Euro 2016 knockout stages, the highest ranked soccer player is Robbie Keane in sixth place.

Paul and Gary O’Donovan, Ruby Walsh and Johnny Sexton all come in ahead of the striker with Robbie Brady further back in 10th place.

McGregor only debuted in the standings in 2014 with just four per cent of the vote but has gone from there to the very top in just two years.

However, the Dubliner’s history-making win over Eddie Alvarez to add the lightweight belt to his collection alongside the featherweight title ranks well down the list of the Greatest Sporting Achievement of the year with just nine per cent.

The O’Donovan rowing brothers – who won Ireland’s first ever medal in the sport at the Rio Olympics – came in second place, while 19 per cent of people voted Ireland’s test win over New Zealand in Chicago to be the single greatest sporting achievement of the year.

Despite failing to secure back to back wins against the All Blacks in the return leg of the fixture, the Chicago victory, as well as wins over South Africa and Australia, were enough to see them named Team of the Year for 2016 with a massive 31per cent of the vote, an accolade they also collected in 2014 and 2015.

The achievements of Stephen Kenny’s Dundalk – who became the first Irish club not just to pick up a point but to win a match in the group stages of European competition – were deemed less than those of the rugby team as they had to settle for second place with 15per cent of the vote.

Soccer is still the most popular sport in the country with 21per cent of the vote, ahead of rugby – the preferred sport of Irish women – and Gaelic games which tied on 17per cent.

Meanwhile, their performance on the water in Rio may have landed them an Olympic silver medal, but it was the O’Donovan brother’s famous RTÉ interview, when they revealed their diet of “steak and spuds” and strategy to “pull like a dog”, that will last long in the memory of the nation and was voted the most memorable sporting moment of 2016 on 23per cent. Other memorable moments included Robbie Brady’s header in the 84th minute to secure victory against Italy at Euro 2016 on 14per cent.

“Conor McGregor really is the story of the 2016 SSSI and has propelled himself into the psyche of the Irish public, especially with the younger 18-35-year-old demographic. The O’Donovan brothers were relatively unknown heading into Rio 2016 but are now household names and extremely popular. Four rugby players and two soccer players also make the top 10 list and only one female makes the top 10 list,” said Mick O’Keefe, CEO of PSG Communications.

“There is undoubtedly seasonal bias and major successes that happen earlier in the year tend to drift in people’s consciousness as the end of year approaches. There were so many sporting moments and highs and lows from Robbie Brady’s winner versus Italy to Munster Rugby’s emotional tribute to Anthony Foley but more than anything, this year’s research illustrates that as a nation, we are obsessed with sport and blessed with our sports teams and sports stars.”

1 Solskjaer scathing of England’s handling of Mason Greenwood
2 Tour de France offers magical escape but is it all make believe?
3 Champions Cup quarter-finals: Kick-off times, TV details, team news and more
4 Paris in green beckons for Sam Bennett after passing final Alpine test
5 Head-to-head: Jack Conan and Billy Vunipola know how to lead from the back
Real news has value SUBSCRIBE
Here is your handy guide to sport on television this week