Ibrahimovic steps up late to give Man United dramatic win 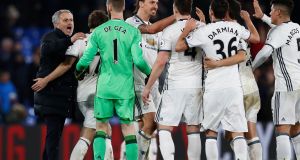 A ruthless streak has returned to Manchester United’s game after all. Apprehension had been setting into the visitors’ approach as the clock ticked down and the prospect loomed ever larger of shedding points to a Crystal Palace team whom the elite will consider there for the taking. Too often of late, José Mourinho has seen dominance yield only draws. Then, two minutes from time, came salvation.

It was Paul Pogba who slipped a pass beyond Scott Dann for Zlatan Ibrahimovic, darting on the diagonal into the penalty area, to collect on the gallop and convert emphatically back across Wayne Hennessey and inside the far post. The quality of the goal was not in keeping with a scrappy game but it mattered little. Mourinho and his coaching staff, who had been fuming alongside the substituted Wayne Rooney at perceived mistakes from the officials, erupted in celebration while the locals sagged. This team are now unbeaten in seven. The statistics look more favourable after late success.

United had arrived in this congested corner of south London only an hour before kick-off, the roads gridlocked after industrial action decimated local train services, though the capital’s traffic seems to catch out their coach drivers rather more than most. Pardew had hoped Palace would make life just as tricky on the pitch from the outset, suggesting his team selection – Mathieu Flamini was making his first competitive start since Arsenal’s Champions League defeat at Barcelona in mid-March, when he was booked and substituted at the interval – might “upset” Mourinho. In truth, that was quickly exposed as wishful thinking. This team’s recent defensive frailties have forced them back into their shells, forever praying for an opponent’s mistake, with their play circumspect as a result. United were permitted to ease themselves into the occasion, even if their rhythm was rarely upbeat.

A pernickety referee did not help, but this was desperately fragmented. The home side, choked by nerves, were utterly unable to retain the ball for any length of time while United were far too laboured in their own possession. The lead they held at the interval perhaps reflected the reality that they were more coherent as a unit, pinging their passes contentedly enough, but their threat had been sporadic and the reward gained distinctly dubious. Martin Kelly’s foul in stoppage time at the end of the period had been penalised, but Juan Mata’s free-kick was chested down via an arm by Zlatan Ibrahimovic towards the six-yard box. The ball flicked off Joel Ward en route, but Paul Pogba had been offside at the Swede’s touch.

Regardless, he poked it beyond Wayne Hennessey and the home side appealed in vain for an assistant’s flag. That deflated the locals, who had envisaged all their industry seeing out the half level. The contest had actually dragged to within eight minutes of the interval before conjuring a shot on goal of any note, with Pogba, afforded too much time, clipping a pass into the space beyond Damien Delaney where Wayne Rooney loitered. The England captain swivelled and connected on the half-volley, but Hennessey reacted smartly enough to push the attempt round the post. The Wales international repeated that trick when Ander Herrera’s diagonal bypassed James McArthur on Palace’s right and Pogba planted a volley goalwards. Hennessey deserved better than to have his efforts undone by an oversight.

Yet the real frustration had been Palace’s inability to liberate Wilfried Zaha to stretch their opponents. On the few occasions the winger turned auxiliary striker did sprint at Marcos Rojo, or the opposing full-backs, United had been unsettled. The Argentinean was cautioned for one two-footed lunge which, if nothing else, showed he had not learned from escaping sanction for a similar tackle recently at Everton. Joe Ledley fizzed his first meaningful touch after replacing Flamini just wide of a post to suggest greater urgency. Their conviction was fuelled further by McArthur’s belted effort from distance which appeared set for the top corner before David de Gea, thrillingly, turned it away at full stretch with his right hand.

The Scot found more joy from closer in. United had dozed, their rearguard suddenly ragged as the home side whipped up some rare pressure, with Delaney conjuring the cutest of flicks round Phil Jones for McArthur, liberated from Pogba, to collect. He converted with glee, with his team-mates swarming in disbelief around a tickled Delaney.

The centre-half is not known for his subtlety. The shock served to shrug United awake again, with Ledley fortunate to escape conceding a penalty after the ball cannoned out of the area from his elbow. United were just as incensed when a linesman denied Juan Mata his tap-in from Rojo’s nod down. The Spaniard was well behind the ball as it was played, with the assistant perhaps drawn instead to Rojo’s position as he planted the header across goal. Regardless, Palace were heaving to clear their lines once more, their brief spell in the ascendancy surrendered.

Desperation had set back in. It took Hennessey’s smart reactions, denying Jesse Lingard on the turn, to maintain parity and United huffed and puffed in search of that a winner. It was eventually conjured by that moment of brilliance from Ibrahimovic to leave the locals, not for the first time in recent months against these opponents, numbed in disappointment. Palace’s clamber towards mid-table will have to wait.