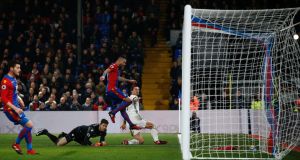 Manchester United’s Zlatan Ibrahimovic slides the ball into the net for his side’s winner against Crystal Palace at Selhurst Park. Photo: Getty Images

We begin this morning with our Women in Sport pages on the eve of The Irish Times/Sport Ireland women’s sports awards.

Last week Malachy Clerkin was joined by Irish Times writer Mary Hannigan, Olympian Natalya Coyle, Mayo and Shelbourne’s Sarah Rowe and RTÉ’s Evanne Ní Chuilinn to discuss the state of women’s sport in Ireland and how there is much work still to be done.

However, a lot of work has already been done and, in her column, Sonia O’Sullivan points to awards such as those taking place tomorrow night to highlight the leaps and bounds women’s sport has come on in this country.

On to football and Chelsea extended their lead at the top of the Premier League to six points last night as they overcame a resilient Sunderland side, thanks to a Cesc Fabregas goal.

Antonio Conte’s side have now won their last 10 games in a row and will top the table on Christmas Day with Liverpool as their nearest challengers.

Jurgen Klopp’s side saw off Middlesbrough at the Riverside Stadium as Simon Mignolet kept a clean sheet after coming in for the dropped Loris Karius.

At Selhurst Park Zlatan Ibrahimovic struck late for Manchester United to complete a 2-1 win and keep them within six points of fourth-placed Manchester City who got back to winning ways at home to Watford.

Toner relishing leading from the front

In rugby John O’Sullivan this morning uses his statistics column to look at the impressive figures of some Irish players in the Champions Cup so far - particularly Connacht’s Cian Kelleher and Jamie Heaslip at Leinster.

In GAA Dessie Farrell steps away from his role as GPA chief executive today but leaves behind a legacy of the €6.9 million government funding that has just been secured for the player grants scheme.