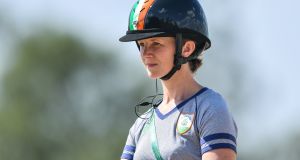 On board her Olympic mount Vancouver K, which is owned by her parents Joe and Kathleen, the Germany-based competitor performed her new freestyle programme for only the second time and surprised the large audience in the Grand Hall at the Christmas show with a special festive version of the music.

The combination received a score of 78.269per cent to place fourth behind Britain’s Carl Hester on Nip Tuck (84.669), Hans Peter Minderhoud of The Netherlands with Glock’s Flirt (81.880) and the latter’s compatriot, Edward Gal, riding Glock’s Voice (80.467).

Reynolds revealed that she only received the music two days before debuting the freestyle at the FEI World Cup qualifier in Stuttgart, Germany last month and from Olympia commented: “It is technically a very difficult freestyle test, I think the only way I could make it more difficult is to add in a tempis sequence on a curve!”