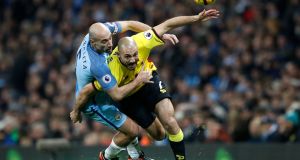 When the owners of Manchester City finally managed to persuade Pep Guardiola to oversee the next stage of their masterplan it is fair to say they probably did not expect to be approaching Christmas scrapping away for a narrow win against a team of Watford’s limitations to register their first league win in three months on their own ground.

The revolution certainly has not taken off as people might have imagined but City, with Arsenal to come on Sunday, should feel better for this win even if it could also be argued not been many visitors to this stadium have operated with drearier tactics than this prosaic Watford side. Claudio Bravo, City’s erratic goalkeeper, did not have to make a single save until the 76th minute and when the opposition are this disappointing it is not entirely easy to know whether or not the victory signals Guardiola’s team have started to click again.

They will be mightily relieved, however, that Odion Ighalo made a mess of Watford’s only other chance before David Silva soothed any lingering nerves by turning in Raheem Sterling’s pass five minutes from the end of normal time. City duly recorded only their fifth win in their past 16 matches and, though it was anything but a classic, they can reflect on a satisfying evening’s work bearing in mind they had taken only 12 points from the previous 27 available.

No one could have expected a run of that nature after an all-conquering start to the Guardiola era, encompassing ten straight victories, and the change in mood could probably be reflected by the subdued atmosphere before Pablo Zabaleta turned up the volume, 33 minutes in, with his first goal for two years.

Until that point Watford had looked reasonably comfortable. Yet the decision to start with Troy Deeney on the bench, mindful that a booking would have meant his suspension from the trip to Sunderland on Saturday, was not hugely ambitious on the part of Walter Mazzarri and the visitors were increasingly being forced back by the time City made their pressure pay.

Kevin de Bruyne was prominently involved, as he so often is, and when his left-footed cross eluded a queue of four team-mates inside the six-yard area Zabaleta was at the far post to drive his volley past Heurelho Gomes in Watford’s goal.

The downside for City was that they lost Ilkay Gündogan in the first half after the midfielder jarred his knee in an accidental collision with Nordin Amrabat. Gündogan raised his hand in distress straight away and, though he was able to carry on for a short while, it quickly became apparent he would not be able to continue, meaning Fernando loped on instead to take his place alongside Yaya Touré.

Otherwise, Guardiola had continued his policy of wholesale changes, reverting to an orthodox back four but finding no place for John Stones after his recent lapses, as well as leaving out four other players from the 4-2 defeat at Leicester City on Saturday. Guardiola has now made 27 personnel changes with either his goalkeeper or defence in the league and 55 for the entire team. He is not the only manager who likes to switch things around as a force of habit but it might help to explain why his team are still finding themselves under their new and rapidly evolving tactics.

Not that it was entirely easy to understand Mazzarri’s thinking, too. His team played with a remarkable lack of ambition given this was clearly a good time to be coming up against City and perhaps if they had dared show a touch more adventure they might have come to realise why Guardiola’s team had kept only two clean sheets in their previous 15 league fixtures.

For long spells it felt as though no one had bothered to inform Watford’s players that Bravo in City’s goal could be a danger to his own team. Nicolás Otamendi and Aleksandar Kolarov were playing in the centre of City’s defence and, again, it was perplexing why the team in yellow did not do more to find out why these two have a reputation for being accident-prone. Jerome Sinclair, a summer recruit from Wigan Athletic, was given his first start in attack but he and Ighalo were only on the fringes of a flat team performance. City, with Sergio Agüero serving the second game of his four-match suspension, did not get anywhere close to their best but, then again, they did not have to.

Sterling, to give him his due, tried to enliven the night and there were plenty of touches from De Bruyne and Silva to admire. Touré helped everything to tick over and Nolito, deputising for Agüero, produced one of the game’s better moments with a lovely turn away from Sebastian Prodl.

Overall, though, it was a drab match for long spells.

Etienne Capoue at least had a go at testing Bravo with a volley into the goalkeeper’s midriff before Ighalo fired over from Amrabat’s right-wing delivery when the striker had the chance to change the complexion of the night. That miss was costly as Silva stroked in the second goal following a three-on-two breakaway.