Chelsea make it a perfect 10 to go six points clear 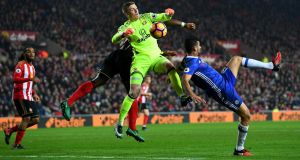 Jordan Pickford of Sunderland and Diego Costa of Chelsea compete for the ball during their Premier League clash at Stadium of Light in Sunderland, England. Photo: Laurence Griffiths/Getty Images

They say perfection is a flame that many touch but few can hold. If so, Chelsea are showing every indication of possessing sufficient ruthless consistency to achieve it this season, with the latest, fairly compelling, evidence arriving at Sunderland’s expense.

A 10th straight Premier League win left Antonio Conte’s team six points clear at the top of the table on a night when Cesc Fàbregas not only scored the winning goal but, courtesy of a high-calibre central midfield performance, reminded everyone of his enduring importance.

Fàbregas also helped keep David Moyes’s side stuck firmly to the bottom of the division with their horizon looking increasingly bleak. They created precious little of note until stoppage time when Thibaut Courtois’s brilliant diversion of Patrick van Aanholt’s volley came between Conte and a technical area meltdown.

Moyes has never been a fan of three at the back and likes to point out that serious prizes are rarely won by teams configured with central defensive trinities. There are exceptions to every rule though and, here, Sunderland’s manager startled locals by arranging his side in a 3-4-3 formation, mirroring Chelsea’s system.

Maybe the super full moon, high in the Wearside sky, prompted such boldness, perhaps imitation really is the sincerest form of flattery or possibly matching the opponents’ shape is the latest tactical fad. Whatever the reason, John O’Shea was in the David Luiz sweeping role and Jermain Defoe flanked by the recalled Adnan Januzaj and the finally fit again Stamford Bridge old boy Fabio Borini.

Everything looked set to change when, for once, Diego Costa escaped the attentions of O’Shea, Lamine Koné and the former Chelsea centre-half Papy Djilobodji. Unmarked, the centre-forward connected with a cross from Marcos Alonso, a one-time Sunderland loanee, but failed to get a proper purchase and sliced the ball horribly wide.

It was a warning Sunderland failed to heed as they permitted N’Golo Kanté to win the ball deep in midfield. That interception prefaced Cesc Fàbregas and Willian – deputising for the injured Eden Hazard – exchanging passes.

By shaping to shoot but, instead, squaring, Willian deceived a Sunderland backline that proved powerless to prevent Fàbregas sweeping the ball low past Pickford into the bottom right-hand corner from the edge of the area.

In an instant Sunderland’s plan of sitting back and hoping to snatch something on the break was shattered and the resultant frustration seemed manifest by swift bookings for Defoe and O’Shea following fouls on Fàbregas and Costa respectively.

Indeed, with a Willian free-kick whizzing fractionally off target half-time could not come quickly enough for the home side.

They re-emerged apparently re-galvanised and, almost immediately, very nearly scored with their first real chance. Catching Chelsea in momentarily dozy mode, Defoe played in the overlapping Januzaj whose fine, first-time, shot forced the previously marginalised Courtois into a superb save.

Suitably stung, the visiting riposte proved rapid and vicious. Willian delighted in dodging Koné in manner that made a mockery of the £25m release clause contained in the defender’s contract and his ensuing shot deflected off Djilobodji before brushing the bar.

The time had come for Victor Moses to advance from right wing-back and bewilder the Sunderland substitute Seb Larsson before shooting left-footed and narrowly wide. By now there was little respite for the home side, a reality emphasised as David Luiz’s typically elegant pass picked out Willian who also shot just wide.

Fàbregas delighted in showing off his stellar passing range and one exquisite delivery should have promoted a goal for Willian and there was the volley Fàbregas could not direct quite on target but still the second goal refused to come.

Such misses nearly proved costly in stoppage time when Moses conceded a free kick for fouling Van Aanholt. From Larsson’s dead ball, Van Aanholt unleashed a spectacular volley seemingly destined for the top corner until Courtois earned his money with a stunning, win-preserving, save.