Pat Hickey on his way back to Ireland from Brazil 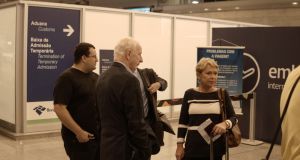 Pat Hickey is on his way home to Ireland, after four months in Brazil, after his dawn arrest at his hotel in Rio de Janeiro during the Olympic Games, on allegations including ticket touting, ambush marketing, and money laundering.

The former Olympic Council of Ireland president, who has resided in beachside Leblon, on the south side of Rio de Janeiro, since his release from Bangu maximum security prison, went through the security gates of Rio’s international airport at 8.15pm on Wednesday night (10.15pm Irish time).

The 71-year-old, who was granted permission to return to Ireland in order that he receive medical attention, was with his wife as he entered the airport. His legal team said he has already booked heart surgery in Ireland.

Mr Hickey said he had no comment to make, as he entered through security.

A bond amount was paid to the local courts by the Association of National Olympic Committees as a loan, to remove Mr Hickey’s travel ban, which was one of the conditions of his release from prison. Mr Hickey is expected to arrive in Dublin on Thursday.

He was expected to travel on the British Airways service from Rio overnight, landing in London Heathrow on Thursday at 12pm.

Mr Hickey was obliged by the Special Court for Supporters and Large Events in Rio, which had jurisdiction during the Olympic Games, while the regular courts were in recess, to sign a document promising to fully co-operate with all aspects of the ongoing legal process in Brazil, and to return to Brazil as required during that process.

Public prosecutor responsible for the case, Marcus Kac said the legal case could begin as soon as next month, and may go on for as long as a year. He said that the court had discretion to allow for the case to begin, if Mr Hickey were unable to travel.

In the decision published last Monday in Rio, Judge Marcello Rubioli ordered that Mr Hickey maintain representation in Brazil to receive all intimations of the courts. Mr Hickey denies any wrongdoing.