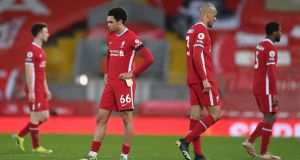 Liverpool slumped to a club record fifth-consecutive home defeat last night, with Chelsea the latest side to emerge from Anfield with all three points. Thomas Tuchel’s side outplayed their beleaguered hosts on Merseyside, with Mason Mount’s finely taken first-half goal setting up an ultimately comfortable 1-0 victory. The result moves Chelsea up to fourth place in the Premier League, with Liverpool languishing in seventh. Earlier in the evening Everton edged out West Brom 1-0 at the Hawthorns to reemphasise their own top four credentials. Richarlison scored a headed winner against the Baggies, who saw Mbay Diagne’s late effort cruelly ruled out for offside. There was also a narrow win for Tottenham - Jose Mourinho’s side edging out Fulham 1-0 at Craven Cottage. Tonight, Championship form side Cardiff City are in action as they travel to play Huddersfield Town - a fixture which will be Mick McCarthy’s 1,000th as a manager, writes Emmet Malone.

Irish Horseracing Regulatory Board’s referrals committee is to meet at 9.30am this morning to begin the hearing of Gordon Elliott. The Co Meath trainer has been heavily criticised this week after a picture of him sitting on a dead horse circulated on social media last weekend. Elliott is currently banned by the BHA from saddling any runners in the UK, and has seen horses such as Envoi Allen and Quilixios leave his Cullentra yard in the fall out. Whatever punishment the IHRB decide to give Elliott following his hearing, he will not be seen at the Cheltenham Festival, which gets underway in less than two weeks.

6 ‘I’m cheating on my husband with a married man – can we ever trust each other?’

9 TV guide: 22 of the best shows to watch this week, beginning tonight

10 How to build a modern man: Helping boys to grow up happy

13 Aidan Turner: ‘That photograph. Yeah. It took away from the work’

14 Warmer weather to coincide with lifting of 5km travel restrictions

16 Ireland’s Generation Rent: ‘After 12 years renting, I’d like my own front door’

17 Even better than the real thing: Escapist holidays in Ireland

18 US Masters: Hideki Matsuyama shines after the rain to take control

19 Fintan O’Toole: I got a mortgage at 24 – unthinkable for today’s young adults

24 Coronavirus: 14 further deaths and 455 new cases reported in the State

27 David McWilliams: A female-led economy is coming – and it will be better

28 Leadership at issue as Fianna Fáil eyes prospects after pandemic

35 Prince Philip: Irascible, possibly unfaithful – and, since The Crown, so incredibly glamorous

36 Lena Dunham: ‘There’s so much judgment around bigger bodies, like bigger women are stupider’

39 The Mary Wallopers: ‘Folk was never supposed to be safe’

40 I have renovated a property. Can I claim my labour against capital gains tax?