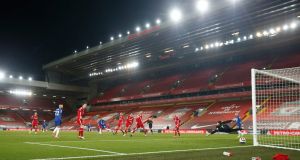 Liverpool have created their own history and many milestones under Jürgen Klopp but the latest slice will leave lasting scars. For the first time in their 129-year existence, Liverpool suffered a fifth home league defeat in succession as Chelsea took a significant step towards Champions League qualification at the expense of the Premier League champions. Mason Mount’s exquisite finish delivered a merited win for Thomas Tuchel’s side.

The England international settled the contest shortly before half-time and, despite a second half improvement from Liverpool, only poor finishing, VAR and a goalline clearance denied Chelsea a more comfortable victory. The hosts’ miserable night, and performance, was encapsulated by Mohamed Salah kicking a water box in frustration and sitting miserably behind Klopp after the earliest substitution of his Liverpool league career. Georginio Wijnaldum’s shot straight at Édouard Mendy in the 85th minute was their first attempt on target.

The sight of Everton in fourth place at kick-off will have stung and motivated Liverpool but reinforced to both teams the intensity of the competition to qualify for next season’s Champions League. Chelsea kicked off in sixth place as a result of Everton’s win at West Bromwich Albion, Liverpool in seventh, although Klopp was in the unusual position of benefiting from some positive injury news for a change. Fabinho returned in central defence having been absent with a muscle problem since January 24th and Diogo Jota was back among the substitutes for the first time since suffering a knee injury in early December.

His goals, and the different options he provides in attack, have been sorely missed by the champions, who again struggled to turn promising possession into opportunities in the first half at Anfield.

Tuchel’s team carried the greater threat before the interval and the lively Timo Werner should have rewarded them for it. A combination of bad finishing and bad luck, however, brought further frustration for the £53m striker. Werner’s first chance arrived when he controlled Ben Chilwell’s long ball expertly on the edge of the Liverpool penalty area. A polished first touch took him inside Ozan Kabak and a powerful drive flew over Alisson’s crossbar. The Liverpool goalkeeper had declared himself available following the death of his father last week.

That chance was difficult for Werner, but there were no excuses for failing to convert his next when César Azpilicueta’s overhead kick found him completely unmarked inside the Liverpool penalty area. With Thiago Alcântara unable to intercept the defender’s cross, and Kabak playing Werner onside, the striker had only Alisson to beat from six yards when the ball arrived. To the audible despair of Tuchel, he steered a tame lob straight into the grateful keeper’s grasp.

It appeared third time lucky for the Germany international when Liverpool’s insistence on playing a high defensive line almost cost them the opening goal. Jorginho’s long ball over Fabinho dropped in space for Werner to poke the ball beyond the advancing Alisson, race into the area and convert under pressure from the sliding Kabak. Both teams were in position for the kick-off when the VAR check was signalled.

The forensics team found that Werner’s shoulder was fractionally ahead of Andy Robertson’s foot when Jorginho’s ball was played and Liverpool were reprieved. But only temporarily.

For a spell after Werner’s disallowed goal there was more urgency and invention about the hosts. Sadio Mané was presented with an excellent chance when Trent Alexander-Arnold released him behind the Chelsea defence with a glorious ball from deep. The Senegal international completely fluffed his attempt on goal and Mendy gathered with ease.

That was Liverpool’s one and only clear opening of the first half. Their high line continued to invite Chelsea to drop long balls over the top and it was eventually punished in clinical fashion by Mason Mount shortly before half-time. N’Golo Kanté, in possession after Azpilicueta intercepted a Roberto Firmino cross, sprayed a pass out to Mount racing into the space vacated by Alexander-Arnold. The 22-year-old’s intent was clear as he attacked the Liverpool area and rounded Fabinho before curling an inch-perfect finish inside the far, bottom corner. It was no more than Chelsea deserved.

Liverpool’s passing and movement improved in the second half, it had to, but they were denied a penalty for what appeared a clear handball by Kanté when Firmino’s chip inside the area struck the midfielder’s raised right arm. The referee, Martin Atkinson, a late replacement for the self-isolating Craig Pawson, was unmoved by Liverpool’s appeals and VAR did not intervene. The close proximity of Firmino to Kanté may have saved Chelsea but let’s be honest, who knows anymore?

The visitors were close to doubling their lead when Chilwell broke into the Liverpool area. Alisson blocked the wing-back’s shot with his chest but the rebound fell to Hakim Ziyech, who beat the keeper with a low left foot shot only for Robertson to clear off the goalline.

Klopp introduced Alex Oxlade-Chamberlain for a clearly unhappy Mohamed Salah and Jota for Curtis Jones in a bid to inject much-needed energy and sharpness into the Liverpool attack, but Chelsea always looked dangerous. - Guardian