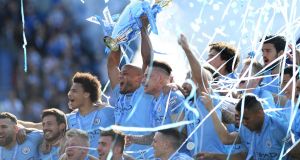 After the week that was in it, you’d have been half expecting Brighton to score three in the last 12 minutes, followed by two Liverpool own goals in injury-time before a missed Manchester City penalty and then Jordan Henderson scoring from the halfway line, prompting Jürgen Klopp to storm the pitch, rip off his clothes and do a naked Macarena in front of the Kop.

In the end, though, the title race concluded tamely enough, most of the entertainment actually taking place on the Brighton pitch after the final whistle when Graeme Souness just about stopped himself from decking Yaya Touré.

Over on RTÉ Clare hurling manager Gerry O’Connor had been asked if he was nervous ahead of the Championship opener against Waterford, admitting that “there are some butterflies, but they’re flying in formation”. You’d have thought Pep Guardiola and Jürgen Klopp might have felt the same, but both men insisted they were perfectly chilled ahead of D-Day, Pep claiming that he hadn’t lost a wink of sleep, Jürgen adamant that everything was cool.

Would he be getting updates from Brighton every five seconds, Patrick Davidson wondered? Nope.

Liverpool, then, in case Patrick didn’t know, had to win the game, but they needed some assistance from Brighton too. And Anfield thought they’d got it in the early stages, a Mexican wave of highly joyous cheering filling the ground after reports of a Brighton goal – reports, by all accounts, that emanated from the Wolves fans in Anfield. Nobody, of course, could ever condone such rascal-ish behaviour, but . . . chortle.

It all left Jamie Carragher befuddled, his voice going up several notches (ie enough to ground all flights at John Lennon Airport) when he thought Brighton had scored, his desolation on learning they hadn’t leaving him broken. “God help the fella who’s spread this rumour,” he said, and he said it with such meaning you’d a notion he wanted to remove said fella’s limbs from his trunk.

But then his spirits soared when Sadio Mané did what he oft does, inserted the ball in the net.

But that isn’t, of course, how football works, although when Glenn Murray headed home for Brighton all you could say was: ‘Oh, hello?’

When the muscles in Graeme’s upper cheeks began to twitch, you feared for Yaya’s safety

Gary Neville tried desperately hard to sound happy for them, his only consolation being that it wasn’t Liverpool who’d prevailed, although when the score came through from Old Trafford – “United 0, Cardiff 2? What?” – he was actually beyond caring about football any more. He was quite a useful cricketer in his youth, so expect him to have returned to that code by next season.

So, 29 years of hurt and counting for Liverpool, Graeme’s pain not eased by Yaya taking selfies with every celebrating City player who joined them on the pitch. When the muscles in Graeme’s upper cheeks began to twitch, you feared for Yaya’s safety. You know how Graeme feels about this selfie lark.

And then Leroy Sané decided to drown Yaya in champagne, the problem being that Graeme and his very silky suit got caught in the crossfire.

“AW, YOU BAAAAAAASTARD,” he roared, which left David Jones needing to apologise to the viewers lest we be offended, but the truth is we were way too busy ROFLing to be upset. “It’s a good job Graeme isn’t playing against Yaya in a couple of weeks – you’d be after him, wouldn’t you?” asked Jamie Redknapp. Graeme’s cheek muscles twitched again, so we took that as a yes.

It went from bad to worse for Graeme when Bernardo Silva couldn’t understand a single word he was saying, not because Bernardo doesn’t speak English – he does, perfectly – but because Graeme speaks Scottish. So, he tried addressing the Portuguese lad like he was ordering sangria on a beach in Albufeira.

Graeme: “OUR LEAGUE, HARD THING TO PLAY IN?”

By the time the coverage ended, Graeme left the ground stinking of champagne but with nothing to celebrate. If Yaya asked him for a selfie before he departed, you’d fear Yaya will never walk again, never mind alone.

1 Waterford turn Kilkenny upside down and inside out
2 Jim McGuinness: There is a way to save championship and make it competitive
3 Sordid murder of hurling brothers still resonates in south Galway
4 Waterford’s frenzied waves of attacks too much for Kilkenny
5 Has Mike Tyson completed the least likely redemption story in American sport?
Real news has value SUBSCRIBE
Here is your handy guide to sport on television this week