Baldwin being bitten by lion the latest twist in new Pro14 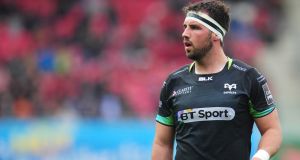 Scott Baldwin took things a little too far at a wildlife centre when he began to pet a lion “like a kitten”. Photograph: Kevin Barnes/Inpho

Some weeks, column writing is a pain. If there’s no big outrage demanding your tuppence-worth, none of the robots out in the sports world saying anything interesting, no quirky yarns down among the weeds, you’re in trouble. Sometimes, there’s just nothing to write about.

And other weeks, a rugby player tries to pat a lion on the head and nearly gets his hand bitten off.

Step forward Scott Baldwin, Ospreys hooker and erstwhile cat lover. Actually Scott, maybe step back a bit, yeah? In fact, you might want to sit back on the bus there, champ, and have a think about how you’d go about finding your man in the line-out with only seven fingers.

Baldwin was in Bloemfontein for the Ospreys’ first South African game in the Pro14 against the Cheetahs. A down-day trip to a wildlife reserve came to an abrupt end when he went a bit further than his team-mates who were stroking the manes of some lions through a fence and patted one on the nose. The lion, not unreasonably, went lion on Baldwin and next thing you know, he was in the local emergency ward getting stitches.

There’s a lot to unpack here, obviously. While not being an expert on the, eh, ins and outs of petting lions, this column nonetheless is willing to state that our policy is quite, quite rigid on this one. If you need your hands for rugby – or indeed just for life in general – our take on it would be very much that the fewer lions you touch in your life the better.

If the bookies were to put the over/under line on the number of lions this column will lay a hand on at 0.5, canny punters would bang the under like it was a tent peg and the bookies would be in tears at the (non-lion-related) funeral some decades from now.

It must, therefore, be said that this column has what you might call limited sympathy for Baldwin. It’s clear from the videos that he wasn’t the only Osprey with his hand through the fence and so obviously they had been given instructions on how to interact with the beasts. They didn’t just plough in there and start dangling fingers for Simba and the lads to munch on. That would be stupid.

But even under expert supervision, at a certain point you’ve surely got to ask yourself, “What’s the upside of putting my hand through a fence when there’s a lion on the other side?” Best-case scenario, what do you come away with? A story about how you ruffled a lion’s mane? Isn’t that just a story about the half-witted things half-witted humans do? Why would you want that human to be you?

That said, someone whose sympathy is in even shorter supply is Baldwin’s head coach at Ospreys, Steve Tandy.

His post-match press conference reaction to being asked about the incident was glorious. Already fairly narked at his team having been handed a 44-25 beating, Tandy shifted in his seat when the question came and muttered, “Yeah, I was hoping I wouldn’t get asked that.”

And then he proceeded to give Baldwin a savaging that would make the lion reassess his direction in life. For someone who was hoping he wasn’t going to get asked about it, Tandy fairly piled in with his answer, doing nothing to hide his disdain or disgust at his player. It was laced with pure contempt and it was magnificent.

“Yeah, there was an incident with a lion, but it was nothing to do with the lion, in fairness. He did bite Scott but when you put your hand in a fence where there is a lion, then it’s going to get bit.

“And he’s had plenty of warning so it was pretty stupid on Scott’s behalf and he is pretty lucky. But again, it’s nothing to do with where we were – it was a good environment and we’d been told how far back to stand.

“I don’t know what sort of wildlife programme Scott has been watching where you can pat a lion on the head as if it’s a kitten. It’s probably one of the silliest things I’ve ever been involved in. But thankfully he’s okay and hopefully he’ll be back up and running in the next couple of weeks.”

Oh, he’ll be up and running all right. Nobody in and around the Ospreys will be more up or more running than Scott Baldwin just now. You’d imagine that for the next few weeks, Baldwin will be like a teenager who’s been suspended from school and is doing every odd job in the house to try and get back in his parents’ good books. The Ospreys won’t need to employ anyone to wash the dishes or take out the rubbish for the next while. Tandy will probably find his car freshly washed and buffed for him every evening when he leaves work.

Turning into quite an adventure, this South African addition to the Pro12. We’re only a month in and already we’ve had players turned back at immigration for not having the right visas, a player thrown off a plane for not turning off his laptop and now a player bitten by a lion. It’s a long time till next May – what can the rest of the seasons possibly have in store? At this rate, it won’t be complete until Keith Earls and Simon Zebo get lost in a vineyard or some such caper.

One thing is for sure – future visiting teams to that part of the world will think twice about visiting the wildlife parks. Or if they do go, the last thing they’ll see before getting off the bus is a picture of Scott Baldwin’s head on a red circle with a line through it.

1 Keeping Donegal on the road to success a costly business
2 TV View: Roy Keane but Daragh’s keener as Late Late fails to shoot the lights out
3 ‘Manchester United are lucky to have you’: Klopp responds to Donegal schoolboy’s letter
4 Six Nations: Ireland v England all you need to know guide
5 England v Ireland preview: Ireland’s revival to face its sternest test
Real news has value SUBSCRIBE