Brian O’Connor: Joshua looked the part but once you got past appearances it was barely a contest 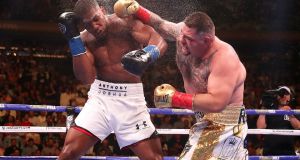 Andy Ruiz Jr (right) lands a punch on Anthony Joshua. Skill won out. Ruiz beat Joshua because he was better than him. Photograph: Nick Potts/PA

Andy Ruiz’s shock defeat of Anthony Joshua to become a world heavyweight champion has been portrayed either as a Rocky fairytale or fat guy punch-line when it’s really a reassuring triumph for sporting skill.

Ruiz doesn’t look like a champion. Even by the standards of our lardy times he cuts a figure to make most of us feel a little better about ourselves. The 29-year -old is the flabby polar opposite of what a chiselled professional athlete is supposed to look like.

So the first reaction of many casual fans when watching Ruiz square up to the undefeated British champion was queasy astonishment, probably mixed with fear for his fate at the hands of a fearsome looking opponent towering over him.

But Ruiz put him down. Not only did he put Joshua down he did so after being sent to the floor himself. Joshua probably thought his task was to keep the fight going a little longer for appearances sake. Instead he got dropped twice in the same third round and wound up beaten in the seventh.

If the world reacted incredulously there wasn’t a hint of fluke about it. Ruiz might look like he’s in a perpetual short queue for the chipper but the substance of the seven rounds that have changed his life forever is he won because he was better than his opponent. Skill won out.

It brought to mind a world title fight from decades before when another British heavyweight Adonis, Frank Bruno, was reduced to rubble by an American journeyman with a similarly casual relationship to the gym, Tim Witherspoon.

“It ain’t a body-building contest,” Witherspoon growled as Bruno’s superb physique got helped from the ring.

A few years later the impeccably prepared Bruno was unfortunate enough to run into Mike Tyson at his peak and got brutally reminded of his opponent’s line about everyone having a tactical plan until they get punched in the mouth. Ruiz’s response to such a shot was superb.

Not surprisingly he is already starting to lucratively work his everyman image to the max.

As well as the WBO, IBF, WBA and IBO titles he is also now possessed of a novelty “Snickers” belt. Made aware of how the newest global sporting star loves their chocolate bar, and has even been known to scoff them during training, Mars were quick to seize their photo opportunity.

It’s the sort of shtick George Foreman worked to the max for years, the jolly grilling machine flying the flag for middle-aged geezers everywhere who think they’re might be one more kick in the old carcass yet.

But there was no joking when Good Ole George got in the ring, just as Ruiz is no laughing matter anymore.

You don’t go seven rounds of championship boxing without being properly fit. You especially don’t get up off the canvass and promptly twice put your opponent on his arse without having stamina. Ruiz beat Joshua because he was better than him.

In fact once you got past appearances it was barely a contest. The champion was both magnificently sculpted  and correspondingly statuesque in his movement.

His opponent looked like he’d come from digging a ditch, had to give away five inches in height and was almost a stone and a half heavier. All that mattered though was he was also possessed of the crucial hand speed to make optics redundant. Substance beat style to a pulp.

Celebrating that isn’t an endorsement for people to recklessly tuck into carbs. But at a time when a prerequisite of sporting success appears to be monastic sacrifice, it’s ironic how the most brutal game of all provides a counterpoint to such earnestness.

Bumper sticker clichés of the sort beloved of coaching chancers everywhere, such as the great and the good being separated only by the willingness to sacrifice, run into a rotund roadblock when it comes to the new heavyweight champion.

He is an ordinary fleshy antidote to so much of what elite sport has become, a rigorously monitored, strength and conditioned, beep tested, pro-biotic, gluten-free masochistic endurance test where attitude trumps aptitude and spontaneity gets sacrificed for the systemic.

So we have the evolution of even an amateur arena like the GAA into a vehicle for power and athleticism rigidly contained within structural constraints familiar to any professional soccer or rugby player.

It may all ultimately contribute to greater athletic performance. We are ceaselessly reminded that success in elite sport comes down to tiny margins. So if those tiny margins are reduced again and again it makes those special talents with the capacity to stand out even more singular.

And of course there is something admirable about athletes pushing themselves to be the best they can be. It is always heart-warming to see sacrifice and willpower rewarded. Ultimately though the application of such sober virtues can never compete with skill for public affection.

No kid is inspired to compete because of a process. Only the most one-eyed of fans can thrill to the sight of regimented tactical ploys working out. Such worthiness is fine but it’s outstanding ability that gets us on the edge of our seats.

It’s why Messi is football’s seminal figure; why Djokovic earns admiration rather than affection from a tennis public in thrall to the sublime Roger Federer; even why it is “Gooch” Cooper rather than one of the current Dublin side’s formidable athletes who remains Gaelic football’s revered modern artist.

The latest world heavyweight champion doesn’t immediately strike anyone as a physical advertisement for supreme sporting success. But the danger of concentrating on cosmetics has rarely been better illustrated than by such a beautiful display of substantial talent winning out.