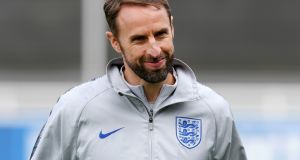 The England senior men’s football team is two matches away from winning a first international tournament since the 1966 World Cup. Beat the Netherlands on Thursday, and three days later either Portugal or Switzerland will await in Europe’s Nations League final.

There’s a novelty value element to the final stages of this new competition. And it’s not like the French and Germans are flagellating themselves over failure to make the last four.

But it is a valid senior tournament with a trophy at the end of it. A couple of decades from now it might carry as much weight as the European Championships, maybe even the World Cup. Novelty can quickly morph into a tradition.

If making last year’s World Cup semi-final felt novel then this latest exploit by Gareth Southgate’s team indicates how England are starting to become genuine contenders at the end of major tournaments.

The question of whether we’re witnessing the beginning of a tradition, maybe even the start of football coming home, makes this week’s action in Portugal far more than a final weary kick of the football season.

There’s also the wider political context of how the chances of an England team finally ending 53 years of hurt comes at a time of this Brexit crisis of English nationalism.

A legend still prevails about how that 1966 World Cup success propelled Harold Wilson into Downing Street. In reality it’s rubbish since he was elected four months before the Wembley final.

However at a time when tweeting any sort of legend gets to trump most any fact it is worrying to think what an opportunist chancer like Boris Johnson might be able to get away with off the back of flag-waving, chest-thumping international football success.

The real existential identity crisis over this could come here in Ireland though. Because what if the Nations League really is the start of a new era for the team so many of us love to hate; will a successful England football team mean we have to grow the hell up?

It’s an old trope about Irish football fans worshipping at the Premier League altar, genuflecting before the top English players when they play for their clubs, and then turning venomous when it comes to them wearing the colours of the ‘Auld Enemy’.

That Scottish phrase indicates how visceral reactions to English assertiveness is hardly unique to Ireland. The legacy of empire means there’s usually no queue when it comes to inserting a country’s name next to ‘Anyone But...’

That most English people react with bewilderment to such hostility only prods those emotional ‘800 years’ buttons even more here, much of it rooted in resentment at how English ignorance of Ireland suggests they’re not nearly as fascinated with us as we are with them.

So, given that there’s rarely a problem that can’t be made worse by waving a flag at it, the prospect of an England tournament win at a time when the worst of our neighbour’s insular instincts are becoming government policy is irritating on an aesthetic basis if nothing else.

It’s not like the England football team doesn’t attract the full Farage-spectrum of insufferable drum-beating, Great Escape-honking idiocy as it is.

Decades of cartoon-stupid jingoism has been blared out to a weary continent despite generations of overrated and chronically underachieving England teams leaving the rest of Europe both wary and weary.

The idea of nationalist triumphalism, fuelled by actual success as much as political and media cynicism, isn’t one to relish.

It’s that blimpish Anglo-Saxon self regard which instinctively gets so many other nation’s teeth on edge and particularly so here it seems.

But in a world where George W Bush and Tony Blair still lucratively exploit the lecture circuit on the back of a manufactured war, portraying our attitude to England in terms of hate is a bit strong. As the Aussie comic Steve Hughes once advised, if you’re going to hate, hate positively!

Except how can you hate a country that’s having a national nervous breakdown in front of your eyes. Pity might be a more timely sentiment, possibly amusement, maybe even something a little stronger, although it’s important to enjoy Brexit responsibly.

In fact rather than getting all chippy and resentful about English football success, this week is a good test to see if we’re actually as mature and tolerant as we like to think we are. We might even be able to stretch to being happy for neighbours in real need of a booster-shot of national morale.

That might mean having to put up with the flag getting wrapped around an even more smug Gary Lineker. But if that’s your gripe then it’s best to remember how we’re hardly averse to extreme national self-congratulation either.

Have we forgotten all that crowing about being the best in the world after beating the All-Blacks in November? For a while nothing could be heard over the slurping sounds of the Irish nation straightforward suckling at the manly teats of Johnny Sexton & Co.

And when it comes to sporting delusions of grandeur there’s little to compare anywhere with this self-absorbed media insistence that all our own football team needs is freedom from shackles that suggest they mightn’t be all that great.

As for boorish expressions of ethnic tinged self-aggrandizement let’s not ignore this growing fondness for employing Aryan-lite expressions like ‘Gael’ with a straight face rather than as a punch-line.

Judging all of us by that dubious standard is as silly as believing England is about nothing but its football team’s most moronic fans. Two dumb stereotypes don’t make a right.

In reality this looks a decent England team with decent individuals led by a patently decent manager. So how mean-spirited and chippy is it to hate the idea of sporting success boosting a troubled nation. We should be bigger than that.

Mind you another World Cup might be a red line issue!