America at Large: Miami not so keen on Beckham United 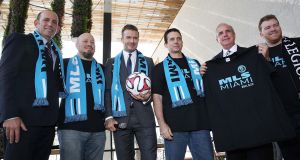 Just over three years have passed since Royal Caribbean, a company that sails cruise ships out of Florida, took an ad in the Miami Herald attacking David Beckham’s plans to build a soccer stadium in the city’s port.

Denouncing the enterprise as “downright nutty”, the former England captain was accused of threatening the livelihoods of over 200,000 individuals, including crane operators, stevedores, longshoremen and truckers. Even for somebody boasting run-ins with Alex Ferguson in full hairdryer mode on his resume, these were opponents of a very different stripe. Within weeks, his ambition to build on the waterfront was abandoned.

When Beckham initially signed for the Los Angeles Galaxy in 2007, the contract included a visionary clause affording him the opportunity to buy a Major League Soccer franchise at a reduced price once he retired. A very smart piece of business. By the time he exercised his option to create Miami Beckham United (as they are often called), the going rate for new outfits was $100m. He paid just $25m. Little wonder he was beaming at a glitzy press conference at the Perez Art Museum in February 2014 as he announced his grand design for a 25,000 seater stadium, a fitting venue for a galaxy of stars soon bound for South Florida.

“We want to bring some of the best football players in the world, great players, to this team,” said Beckham. “Players are already interested in coming to Miami. We are very excited about this project. Miami is a vibrant city and a city with a lot of passion. I know this city is ready for football, for soccer. I’m going to work hard to make this team very successful.”

The facile thinking seemed to be that Miami’s inherent attractiveness to mega-rich footballers wanting to ease their way towards retirement via a stint in MLS, combined with Beckham’s presence, was going to be enough to establish an instant super club. And it may yet prove to be but all involved seriously underestimated the realpolitik of where they were.

As he delivered his spiel, a small plane flew overhead, dragging a banner that read, “Beckham, Don’t Trust Gimenez!” Carlos Gimenez, then mayor of Miami-Dade county, was sitting next to the footballer on the dais and Beckham was about to discover the hard way that the power of celebrity wanes in the face of the internecine squabbling of local politics. The face that shifted millions of Calvin Kleins caused a huge stir when he visited a children’s soccer game later that day but he made much less of an impact dealing with vested interests jealously protecting their turf in a state synonymous with political corruption.

Between that opening salvo and today, Beckham has been embroiled in a labyrinthine saga as he’s searched for a new home. Once the port was ruled out, he talked of trying to build by Miami’s Museum Park. When that failed, constructing a stadium, in conjunction with a local university, on a site next to the Florida Marlins’ baseball field was mooted. While members of his commercial team operated on the misguided principle that Brand Beckham was glamorous enough to dazzle any opposition into submission, each project was scuppered by petty rivalries and planning imbroglios.

At one juncture, it appeared he was going to give up and relocate his plans to southern California. Not the worst idea given the jury remains out on whether Miami is even ready to become a soccer town. While Barcelona and Real Madrid are expected to sell out the Miami Dolphins’ Hard Rock Stadium in a pre-season El Clasico next month, the city has more usually in its past been something of a graveyard for the professional game.

Despite being bulwarked by Carlos Valderrama, the hirsute Colombian international, the Miami Fusion struggled to gain a foothold in the early years of MLS and eventually went out of business. Before that, the Fort Lauderdale Strikers lasted only seven years in the old North American Soccer League, even though their squad included, at different times, George Best and Gerd Muller. The game has flourished all across America in the decades since but has it grown enough to sustain a team in Miami?

Earlier this month, Beckham finally appeared to have closed a deal when his consortium, now including heavyweight partners like Marcelo Claure (CEO of Sprint Cellphones), Simon Fuller (American Idol founder) and Todd Boehly (co-owner of the Los Angeles Dodgers), paid $9m for the final piece of a nine-acre site by the Miami River. The county sold him the land on the proviso he will spend $175m building a stadium and will create 50 full-time jobs in Overtown, one of the city’s poorest neighborhoods.

Uniquely for American sport, and to Beckham’s great credit, the entire project will be privately funded. Laudable as that may be, and even with the finish line in sight, problems continue to mount. With no room for parking at the location, using public transport to get fans in and out on match days sounds hopelessly far-fetched. Not to mention residents are readying themselves to object to planning permission and the local police are also involved in a row about who should protect the facility. Suddenly, it seems the proposed opening day of 2020 seems a tad optimistic.

At this rate, Beckham may get that knighthood he so desperately craves before his soccer team ever takes the field.