In 1967, the US hosted its first and only soccer season, and Irish players met the stars 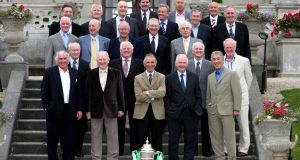 Members of the Shamrock Rovers squad of the 1960s at a commemoration lunch in 2007. Their US adventure is chronicled in ‘Summer of ’67: Flower Power, Race Riots, Vietnam and the Greatest Soccer Final Played on American Soil’ by Ian Thomson. Photograph: Morgan Treacy/Inpho

When the Shamrock Rovers squad managed by Liam Tuohy touched down in Los Angeles that summer’s day, Maureen O’Hara was at the airport to greet them. She grew up watching Rovers at Milltown in the 1930s, sitting with her father in the directors’ box, worshipping the likes of Sacky Glen and Paddy Moore. Now, decked out in green-and-white hooped shirt, Hollywood’s Queen of Technicolor posed for photographs as she hugged the latest generation, was interviewed by television reporters, and did everything she could to promote her hometown heroes arriving in Tinseltown.

It was the tumultuous summer of 1967 and the Dublin outfit were one of a dozen from Europe, Brazil and Uruguay invited to participate in the inaugural and only season of America’s United Soccer Association. It was a bizarre, overly-ambitious experiment, based on the belief that transplanting entire veteran professional teams (and part-timers in the case of the Dubliners and Glentoran) to various cities across the US would showcase the beauty of the game and grow an instant fanbase. Far-fetched as it may have sounded, some of the biggest names in the American sports business, including the Ford family, invested in what turned into an odd yet compelling interlude.

To tap into the Irish expatriate community, Boston Shamrock Rovers, as they were rebranded, were based in New England where they quickly discovered America’s tendency to blur the lines between sport and celebrity. Having found himself strutting down the catwalk in a fashion show alongside Mick Leech (on a few weeks’ leave from Guinness), Paddy Mulligan was then invited to address students at Harvard University, an offer he initially rebuffed before realising there might be some merit in sharing his, eh, slightly different life experience on the northside of Dublin with a bunch of Ivy Leaguers.

Terry Conroy, a long way from his native Cabra, discovered the power of his accent and ethnicity when he fetched up at the airport in Cleveland as part of the Stoke City ensemble. Once the local sheriff, replete with wide-brimmed cowboy hat, was informed the 20-year-old was from Ireland, his Hibernophile radar kicked in and he insisted on personally driving the Dubliner through the streets of the city in an open-topped Cadillac.

“Why does he get to ride up front with the sheriff?” complained Maurice Setters as he and the rest of the team filed onto a far less glamorous bus to make the same journey.

The future Ireland assistant manager earned his own footnote in the record books when he scored the competition’s first goal as the wonderfully-named Cleveland Stokers eked out a 2-1 victory over the Washington Whips (an Aberdeen side who, in a typical promotional gimmick, boasted President Lyndon Johnson as a season-ticket holder) at DC Stadium on May 26th, 1967. The manner in which the 50th anniversary of the league’s birth passed without recognition last week sums up how this is a largely forgotten episode in America’s colourful soccer history.

That the memory endures at all is due to the diligence of Ian Thomson, a Scottish-born writer, who chronicled the United Soccer Association’s solitary season in forensic detail in his wonderful book, Summer of ’67: Flower Power, Race Riots, Vietnam and the Greatest Soccer Final Played on American Soil.

The unwieldy title succeeds in capturing how these players were visiting a country wracked by turmoil and chaos. Squads visiting Chicago were warned to go outside in groups, some of the Washington Whips watched the Detroit riots in which 43 people died that July from their hotel rooftop, and, after tanning too long in the Dallas sun, Dundee United’s Tommy Millar was mistaken for an Indian by a southerner still pining for segregated restaurants.

In a golden age for music, many teams collided with stars as they criss-crossed North America. The Los Angeles Wolves’ Dave Wagstaffe caught up with Davy Jones, a childhood friend from Manchester, by then at the height of his fame with The Monkees. The squad attended a filming of an episode of the band’s eponymous television show and Wagstaffe regularly tooled around the city in his old pal’s GTO Pontiac convertible.

Hibs went to watch The Everly Brothers play the Imperial Room in Toronto one evening, and their celebrity had gained enough wattage that the emcee introduced them to the crowd and asked the players to stand up. They were so drunk, that was a big ask. Another night, Chuck Berry was in town and found himself heading out on the lash with the diminutive Scottish striker Jimmy O’Rourke, a man who barely reached his shoulder. Throw in Shamrock Rovers having an impromptu sing-song with a 17-year-old tyro named Stevie Wonder, and there’s a wonderful portrait of cultures colliding off the field.

Of course, so much about America then was novel. Teams visiting San Francisco to take on the Golden Gate Gales (Den Haag of Holland) encountered strung-out hippies for the first time, and one Dundee United player regaled his colleagues with the tall tale of a suburban homeowner opening a garage door with a remote control button.

If the action never quite lived up to the hyperbolic advance billing, and crowds dwindled as the campaign wore on, Los Angeles Wolves, captained by Northern Ireland’s Derek Dougan, defeated the Washington Whips 6-5 after extra time in an epic final before 17,000 at the Los Angeles Colosseum. A suitably Hollywood ending to the whole enterprise.

1 Pete Sampras: The forgotten great with the best serve in the business
2 Cam Newton broke the mould: Can his flame be rekindled at the Patriots?
3 Super Rugby AU offers glimpse of rugby’s future if law changes are adopted
4 Different Strokes: Frankie leaves Fleetwood for Hollywood
5 Seán Moran: This strange year would have been perfect for inaugural Tailteann Cup
Real news has value SUBSCRIBE
Crossword Get access to over 6,000 interactive crosswords