Worldview: The authoritarian-left is the sleeping giant of Irish politics 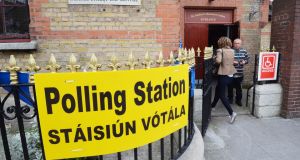 These are the main categories used to analyse the cultural cleavages giving rise to the recent populist surges in European and American politics. They try to capture attitudes to immigration, multiculturalism, globalisation and European integration that are not explained by class-based left/right divisions.

Political parties struggle to straddle these new polarisations which divide their traditional supporters. Some say class divisions have been superseded, but that is too simple, since both dimensions are clearly at play.

For example half of working class voters combine left-wing positions on taxation, welfare and the state’s role with hostility to immigration and globalisation. How these different dimensions interact is a key issue in understanding contemporary politics in Europe – including Ireland.

Various categories capture similar cleavages with different emphases. The graduate/non-graduate distinction runs through all the others. Those with college degrees are more libertarian, open and cosmopolitan in their attitudes to migration and international integration than those whose education stopped at secondary level.

But not all fall neatly into David Goodhart’s distinction between the quarter-plus “anywhere” group in Britain (and elsewhere) who are happy with mobility compared to the “somewhere” category more rooted in particular places and communitarian ideologies. Goodhart expounds on this in his stimulating book The Road to Somewhere:, The Populist Revolt and the Failure of Politics.

Many “anywheres” are also left-wing, filling out the younger and more precarious working generation whose lack of security fuels support for Jeremy Corbyn, Bernie Sanders, Podemos and Syriza. More privileged graduates are winners from globalisation and support Macron’s new centrism in France and elsewhere.

Applying these ideas to Ireland in an important new study Rory Costello of the University of Limerick links them to mapping how the attitudes of voters, election candidates and political parties here overlap and diverge. Published in Irish Political Studies and with a summary blog available on the Political Studies Association of Ireland (PSAI) website, he outlines the social science debate on them which aims to “identify the ideological dimensions that structure voters’ policy views, and to locate voters and parties on these dimensions”.

Such an ideological map “can shed new light on the nature of electoral politics and political representation. In particular, comparing the ideological locations of voters and parties allows us to assess how well voters are represented by existing political parties, and to identify gaps in the policy space that future political entrepreneurs may seek to exploit.” His research clarifies why Ireland has not developed a right-wing populism but could do so in future – possibly around Brexit.

Costello uses voter advice applications to explore the subject. He developed a questionnaire on 22 political issues in Ireland covering a range of attitudes and asked parties, candidates and voters to answer them ahead of last year’s general election. He got very high response rates from the parties and candidates, allowing him create a profile of their attitudes. He then used the same questionnaire online (available on whichcandidate.ie) inviting voters to compare their positions with the others. From the 40,000 replies he developed a weighted sample to make systematic comparisons.

The findings reveal four distinct dimensions structuring Irish voters’ views on policy: a left-right one on economics; a libertarian-authoritarian one on cultural issues like immigration, crime, the environment and European integration; a secular-religion one; and a pro- and anti-austerity dimension on water charges and a property tax. These are used to map overlaps and gaps between voters, parties and candidates.

Costello shows that while most voters and the Sinn Féin, Labour, radical left and Green parties and candidates place themselves to the left of the left-right economics divide, with Fianna Fáil towards the centre and Fine Gael more to the right, the picture is very different when these attitudes are mapped with the libertarian/authoritarian dimension. Those falling into the left-authoritarian category comprise 31 per cent of voters, 55 per cent of those without degrees, 57 per cent of Sinn Féin voters and 37 per cent of those who vote for Independents.

This section of Irish public opinion is not represented by parties, but more by Independents. Sinn Féin’s liberal views on immigration and critical support for the EU do not reflect most of its working class voters. They could be mobilised, possibly along with other sectors directly affected by a hard Brexit if that happens.

Such sleeping giants have moved populism elsewhere and could here too. This valuable research should bring the idea of “policy space” into public discourse alongside the “fiscal space” of recent budgetary debate.

1 Irish tourists excluded from visiting Greece as country begins its tourism season
2 Connell losing touch with the club championship is the real tragedy of Normal People
3 We need to pay very close attention to what is happening in Britain now
4 Remaking Ireland: Five positives from the pandemic
5 Quarantine will cease within fortnight, Ryanair CEO claims
Real news has value SUBSCRIBE